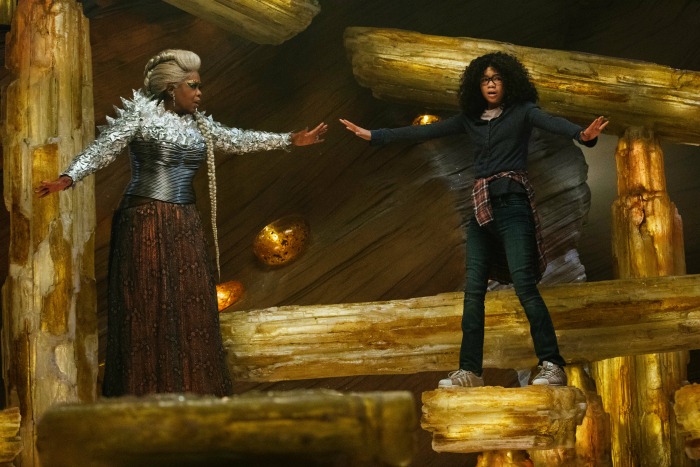 When I told her that I was going to Hollywood to interview the stars of “A Wrinkle In Time”, my 8-year-old daughter Ayva started jumping up and down and ran upstairs to pick up her copy of the book. We had been reading it in anticipation of the movie’s release on March 9th and she couldn’t believe that I got to see it before her.

I don’t even know how Ayva knows that Oprah is shriek-worthy, but I was grateful to have someone else to be as excited as I was when I found out I was going to go to the red premiere of “A Wrinkle In Time”. Having the opportunity to interview the women in and behind the film like actresses Mindy Kaling and Reese Witherspoon, director Ava DuVernay, and yes—Oprah are total #careergoals for a writer.

A Wrinkle In Time

Representation is the name of the game this year at the box office, and after the success of Black Panther, I have high hopes for A Wrinkle In Time. My daughter saw the cast and declared, “I’d like to be in a movie like this.” She saw herself and she saw possibility. That’s why it gives me great joy to cover the world premiere of this film with 24 of my colleagues from February 24 – 27.

In addition to our interviews with Oprah Winfrey, Reese Witherspoon, and Mindy Kaling, there will be LOTS of surprise. Follow the hashtag #WrinkleInTimeEvent on all of the social channels to keep up with us.

We’re also going to be covering a few new ABC TV shows and giving sneak peeks of those as well!

Alex, Inc.” (premieres on Wednesday, March 28th at 8:30/7:30c).
Based on the podcast StartUp, Alex Schuman (Zach Braff, “Scrubs”) is a brilliant radio journalist, husband and father of two who is about to do something crazy – quit his job and start his own company. He quickly discovers it’s going to be a lot harder than he thought. Zach Braff stars, directs and is executive producer with Matt Tarses (“Scrubs”) and Davis Entertainment (“Dr. Ken,” “Blacklist”).

Set in the United States District Court for the Southern District of New York (a.k.a. “The Mother Court”), the new Shondaland series show follows six talented young lawyers working on opposite sides of the law and handling the most high-profile and high-stakes federal cases in the country.

Based on the Danish series, “Splitting Up Together” is the story of a couple (Jenna Fischer, “The Office,” and Oliver Hudson, “Scream Queens”) whose marriage is reignited by their divorce. Emily Kapnek (“Suburgatory”) writes and serves as executive producer of this new comedy, along with Ellen DeGeneres.