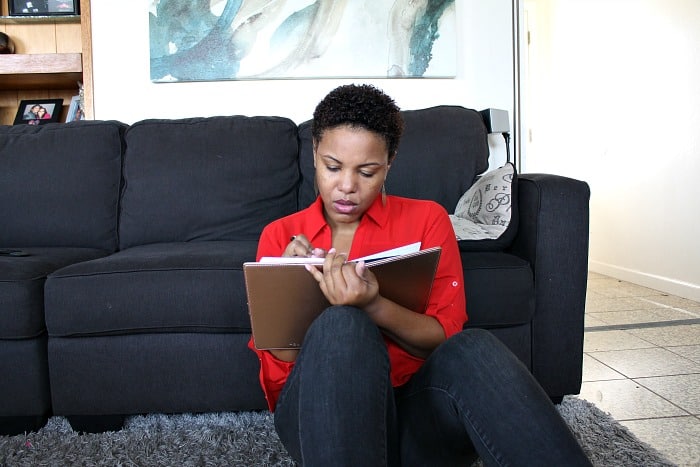 I remember the exact moment I became a perfectionist.

I was in college, working part-time as an administrative assistant at a large pharmaceutical company. It was in the late 90’s when the economy was booming, and everyone with “manager” in their title had a secretary whether they needed it or not.

My boss did not need one, so I spent long days on the early internet, learning HTML and making long distance phone calls to friends at colleges across the country.

I had about 10 minutes worth of work that had to get done each day, so I’d rush through it, and get back to getting paid to do nothing.

Occasionally, one of the Executive Assistants, Jan, who had real stuff to do, would take me up on my offer to help out, and throw a few tasks my way.

One day, Jan was preparing for an important board meeting.

She asked me to make photocopies and put together binders for the meeting attendees.

As was usual for me, I quickly programmed the Xerox machine to collate and hole punch, and then tossed the printouts in the binder. I was done in a few minutes. Bam.

Back at my desk, I was trying to decide where I wanted to go eat when Jan asked me to chat with her for a minute.

Hoping that her next request wouldn’t make me late for lunch, I ran quickly to her office so I could hurry and get whatever she needed out the way so I could leave.

When I got to her office, I saw all of the binders that I’d made on a table, opened up, and she was going through and tossing the papers in the trash.

My stomach dropped as I asked her if everything was okay.

Jan was calm and gracious as she told me that, no, everything wasn’t okay.

She went through the binders with me, one by one, showing me how some of the copies had the page numbers cut off the bottom, and how others were off centered.

Some of the papers didn’t even have holes all of the way through.

Those binders looked a hot mess, y’all, and I was so embarrassed.

Fortunately, Jan had been an Executive Assistant for many years, and had coached many a young lady to perfection.

Something about our talk that day ignited a spark in me, and I became hyper vigilant about making sure any work that I did was on point each and every time.

Years later, as an Education Manager at a non-profit, I was responsible for overseeing the assembly of 60+ binders several times a year filled with pages of curriculum that I created.

I took all of the lessons Jan taught me that day with me, and my binders were flawless.

Anything that had my name attached to it had to be.

In fact, I became so obsessed with perfection, that I was often overwhelmed because, well, no one cared as much as I did about the details.

Well, that’s what I thought anyway.

The Problem With Perfection

The problem with perfection, though, is that if I couldn’t do something exactly right, I wouldn’t do it at all.

The pursuit of perfect turned into a procrastination tool for me. I’d start project after project, only to abandon them when perfection seemed out of reach.

“I don’t have the time to make it perfect, so I’ll do it when I get more time to focus on it.”

Now, here it is, probably 13 or 14 years later, and I’ve got a whole gang of projects that I’ve never finished .

A few weeks ago, I decided that I was tired of letting perfection hold me back. Sure, excellence is the goal in everything that I do, but you know what, I’m not a surgeon.

If something I do isn’t perfect, no one is going to die.

You never get a second chance to make a first impression?

Sure you do! People do it all the time.

As long as you’re not a jerk, and you can admit that, “Hey, yeah. This is the first version of my thing. It might have a few mistakes, but it’s done, and I’m proud of it. I’m totally open to constructive criticism, and appreciate you celebrating its completion with me!”

Kicking Perfection In The Butt

So, that’s exactly what I started to do.

Take for example, the time I kicked perfection in the butt, and released my first ebook.

I had been working on it for months.

It started off as one thing, and turned into another, and finally, I was like, “Yo, seriously? This is getting done.”

I announced it on Facebook, and had people cheering me on as I raced towards the deadline that I set for myself.

And people bought it.

And my husband caught a typo while browsing through it.

A friend messaged me that I needed more information on the author About Me page.

My friends created a book blast.

I sold more than 50 books on that first day.

And to this day, the book is still not perfect.

But I did it. And I’ve gone on to sell thousands more books since then.

I may not ever have enough money or time to make everything I do perfect.

If I hold up my life, and the things I need to get done for that, I might not ever get to completion.

So, I’m not waiting for it. I’m moving forward with what I have, today, right now, and not going to wait for perfection.

What if Harriet Tubman had waited until her situation was perfect?

Or heck, even some of our Mamas!

Getting stuff done. And not being afraid to go back later and revise and reflect and do over.

Listen - this is golden! I've experienced the perfectionist bouts and turned into a procrastinator, too. Thank you for this reminder. And congrats on your book!!!

Thank you, @arielsaysnow:disqus! Come on, let's push through the procrastination together!

This just inspired me to push through for my second wing. I've been prisoner of perfection paralysis for some time. I am learning (rather unlearning) to let it go and get stuff done. This is great.

Thanks, @Nic_Mac:disqus. I have more to do, and I'm glad that you're pushing through it!

LOVE THIS! I find myself doing the same thing when my name is tied to something. When you have pride in your work it needs to be "just so". You're right. Perfection can cripple completion. But, I've also found that most people are not as critical of us as we are of ourselves. When I self-published my ebook I edited so many times I lost count and STILL found errors afterwards. I panicked because I felt people would discount me and my work because of them. Then, I reminded myself of the bigger picture: I finished. That's what's more important. Congrats on your book, can't wait to read my copy.

Thank you, @disqus_xNyiOD2o6I:disqus! I love this statement, "perfection can cripple completion". I think there is something for getting it done and then going back and revising! Glad we've found our way!

Girl... Who has been tellin' you my secrets?! I've been a victim of not accomplishing anything due to the pursuit perfection... shoot, I still am sometimes. What's great is that I am surrounded by awesome people like you who remind me that I'm not alone and that done is better than perfect. Thanks!

It's true, @tespinoza:disqus. And once we make that breakthrough, it's smooth sailing from there! Here's to getting stuff done!