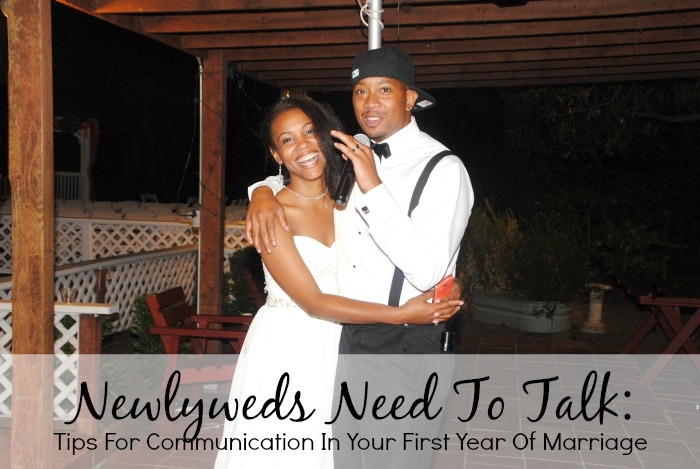 Seven days from now, I’ll turn in my sweet little Newlywed Bride tiara and replace it with my more regal Experienced Wife crown as Terrence and I celebrate our one year anniversary. It’s hard to believe that it’s already been nearly 365 days of happily wedded bliss. Even more surprising is the fact that after all of this time being married, my husband still can not read my mind! We are supposed to be one! No, scratch that.  We are one, and yet he still expects me to communicate my needs to him rather than him being able to know what I’m thinking without me telling him! Crazy, right?

Ha! No, I don’t really expect my husband to read my mind (although that would be sooooo nice). In order for us to get along and understand each other, it’s important to talk together and listen to each other. We’ve been working really hard on that.  When Terrence and I first started dating, he was here in California, and I was in Philadelphia. Being in a long distance relationship helped us to sharpen our communication skills. When we were finally in the same city, though, and living under the same roof, we both realized that there was a lot more to communicating than just conversation. We worked through a few big challenges in the way that we were relating to each other before we got married through counseling and a lot of intentional work, so for the most part, our first year has been pretty smooth in terms of communication.

Can we pause for a second to reflect on just how huge that is?

Our first year of marriage has been pretty smooth in terms of communication.

Wow. I feel blessed just to type that, and totally thankful that it’s our reality.

That doesn’t mean that we haven’t had any arguments. I mean, we are human, and he is a man (kidding!). I think that we’ve just been extremely fortunate to have other married folks around us who counseled us before we walked down the aisle, and who continue to encourage and celebrate with us. Here’s what I’ve discovered about communicating as a newlywed:

It’s impossible for any one person in a marriage to get their way all of the time. Acknowledging that there will be compromises, and that your husband isn’t the only one that will have to make them, prepares you for the inevitable, and makes it not such a big deal. I started practicing that during our wedding planning process. Initially, I didn’t like our wedding venue. I could tell that he was ready to commit to a place, and that venue was the place he wanted. I started to push back and then decided that, although it wasn’t my first choice, it meant more to him than it did to me, so I compromised. Of course, the day of the wedding was perfect, and the venue was amazing, so in that case compromise actually worked in my favor. Actually, compromise always works in your favor if your spouse is happy.

Recognize when you have a real issue, or if it’s just a power struggle.

The hardest part about two becoming one is two becoming one. Whenever independent people who are used to making decisions on their own all of a sudden have to start checking in with someone else to see if they’re on the same page, there are bound to be a few challenges. Way back in the beginning, I asked Terrence to turn the water off when he wasn’t using it. He used to like to turn the water on in the kitchen in the sink, and then basically do a million other things while I watched the precious resource go down the drain. I approached him about it a couple of times, but he wasn’t really receptive. One day, he turned the water on and then left the kitchen. I turned the water off, and he came in and turned it back on. He wasn’t even using it. We ended up talking about it, and realized that he misinterpreted my intention behind the request, and that he thought it was about me telling him what to do and diminishing his power. Totally wrong, but he wouldn’t be the first new husband to feel that way.

Be committed to great communication.

Our saving grace this first year of marriage has been that we are both committed to making each other happy. We listen to each other, and try to empathize and understand where our spouse is coming from. Terrence and I had two totally different life experiences, so I have had to learn to stop using my “Brandi Translator” when I was listening to him, and he had to do the same with me. Instead, we take what each other is saying literally, and accept the words to be true in the exact form that they come out. If Terrence says, “I don’t want pizza tonight”, I take that to mean he doesn’t want pizza, not that he is attacking me for not having a better dinner. This has probably been the toughest part of learning to communicate with each other for me, but I trust my husband, so I believe what he says.

Everyone we talked to before we were married talked to us about the importance of communication, and they were so right. Every single thing we do hinges on whether or not we are able to understand and relate to each other. Would you all mind doing me a favor? Please keep praying that we keep growing in this area. Also, share any other communication tips you have for newlyweds in the comments! I really value the advice I get from other wives!

See pictures from our wedding day! ...compromise always works in your favor if your spouse is happy. ... this right here is huge too! I am not as involved as I would have thought I would be in the wedding planning process, in fact I thought I would be doing it all alone. I usually here that from most brides that have gone through he process or are going through it. I have no idea what that is like though. My fiance is totally committed to making this wedding a night to remember. While I was excited about a simple bbq for our wedding celebration (mainly because of the $$) I've compromised on the overall vision because I see how much it means to him and that means a lot to me. I am blessed :) AND learning that compromise is key ... pick your battles goes hand and hand with that.