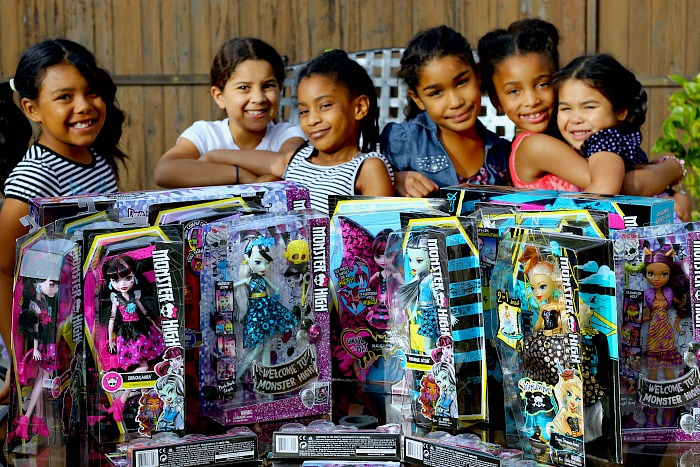 No one has a stronger sense of self than a little girl. Ask any girl between the ages of 4 and 10 to describe herself to you, and you’re sure to hear a flurry of positive words that are a spot on representation of who she is. As girls get older, that desire to be who they are naturally can start to fade away as being like everyone else becomes the norm.

I’m determined to do everything I can to support Ayva in continuing to value being an individual. In fact, I’m not just committed to Ayva, but to her friends, her cousins, and every little girl that I know. I was thrilled to host a Monster High Party for Ayva and her friends, and asked her what she thought the theme should be. Ayva quickly said, “Be yourself!” since that’s a recurring theme that the ghouls of Monster High promote. I thought it was perfect.

Ayva and her friends from church get to spend a few hours together each week during Sunday School, choir rehearsal, and Awana (a Bible class), and they think of themselves as more like family than just friends. Even though they have a lot in common, there’s still so much about each one of them that is unique that the Be Yourself theme was the exact right fit. 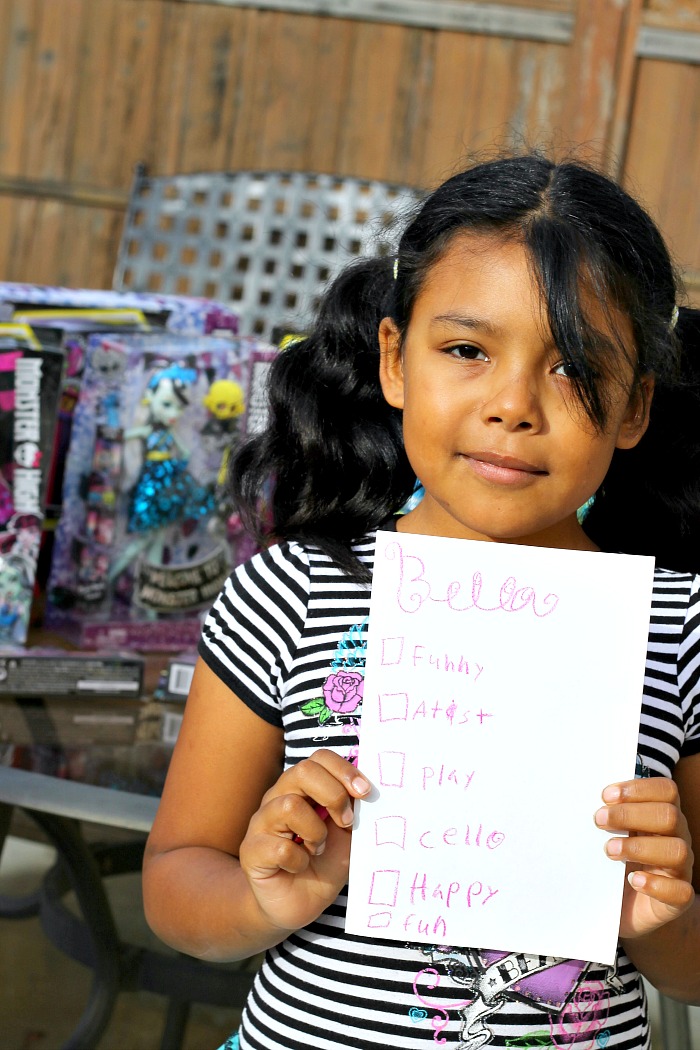 Be Yourself Activity at the Monster High Party

As a mom, I’m always looking for opportunities to encourage my daughter to appreciate the things about herself that make her unique and special. One of the ways I do that is by reminding her that there are no two people who are exactly alike in this world. Everyone has something about themselves that is different, and that’s what makes us so amazing. So far Ayva is really embodying that message, and relishes in having hair and interests that are unlike that of her friends. The more our girls can appreciate themselves for who they are, the more they learn to accept their friends exactly the way they are.

That’s the goal of the Be Yourself Activity that we did at our Monster High Party. It really allowed girls the chance to celebrate their differences. First the girls made a list of words that described them. They shared it out with everyone else, and talked a little bit about why they think the words that they chose represent them.

Afterwards was the really fun part. The girls headed to Ayva’s room to change in to their costumes for a photoshoot! There was lots of squealing and giggling as they transformed into their favorite Monster High characters, Draculaura and Frankie Stein. One of the best things that I overheard was one of the girls saying, “Some of us have on the same costume but we still look so different! Cool!” After fixing wigs and adjusting tights, we headed outside so that the girls could photograph each other.

I reminded them of the words they used to describe themselves, and let each girl decide where and how she wanted to pose for her picture. I told them that their photograph should show us their personality and they didn’t disappoint. It was wonderful watching the monsters direct each other and provide feedback as they photographed one another, and they kept reminding each other of things like, “Remember, you said you’re funny! You need to smile!”

After the photoshoot, the girls…uh, ghouls…ate cupcakes and cookies and chose their favorite doll to play with. Although the wigs didn’t last on their heads once the food came out, they still had a lot of fun, and even asked to do a mannequin challenge! I asked the girls what their favorite part of the party was, and they all said that they really liked being able to talk about what makes them special. And getting to take dolls home, of course! 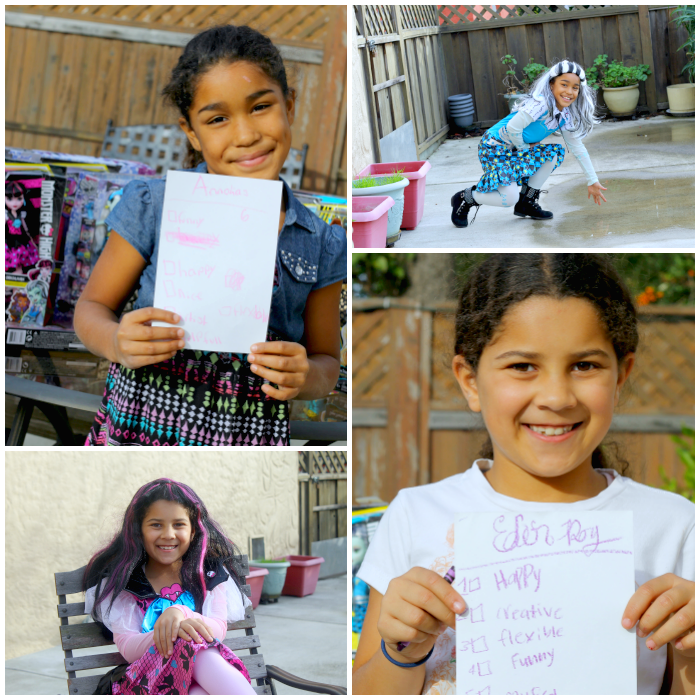 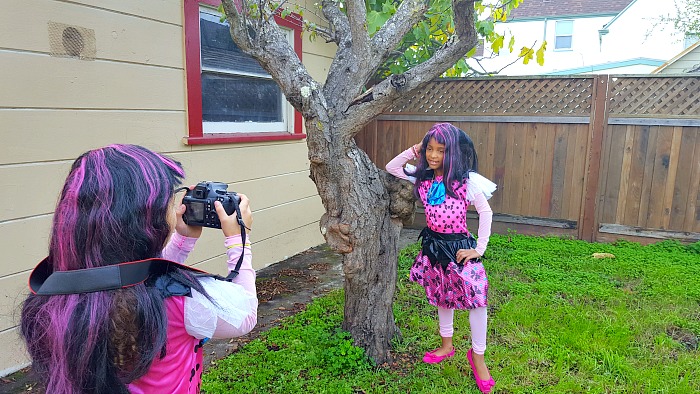 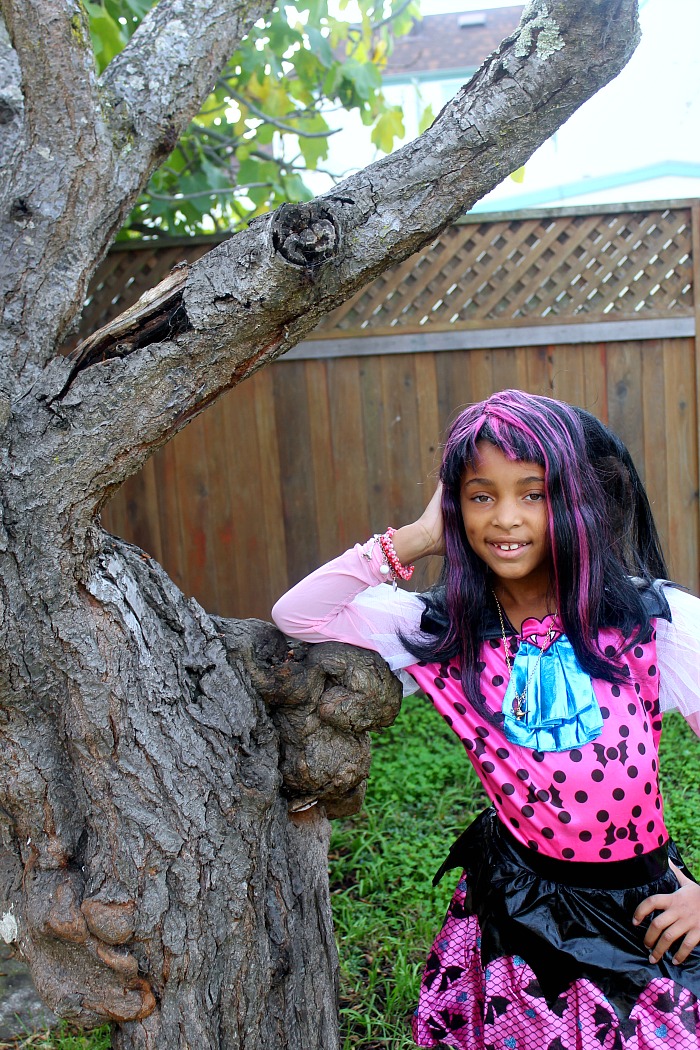 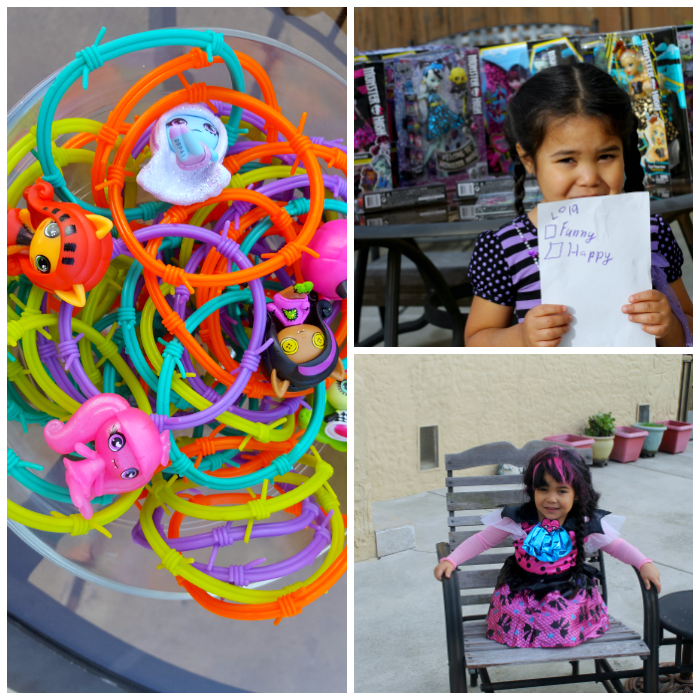 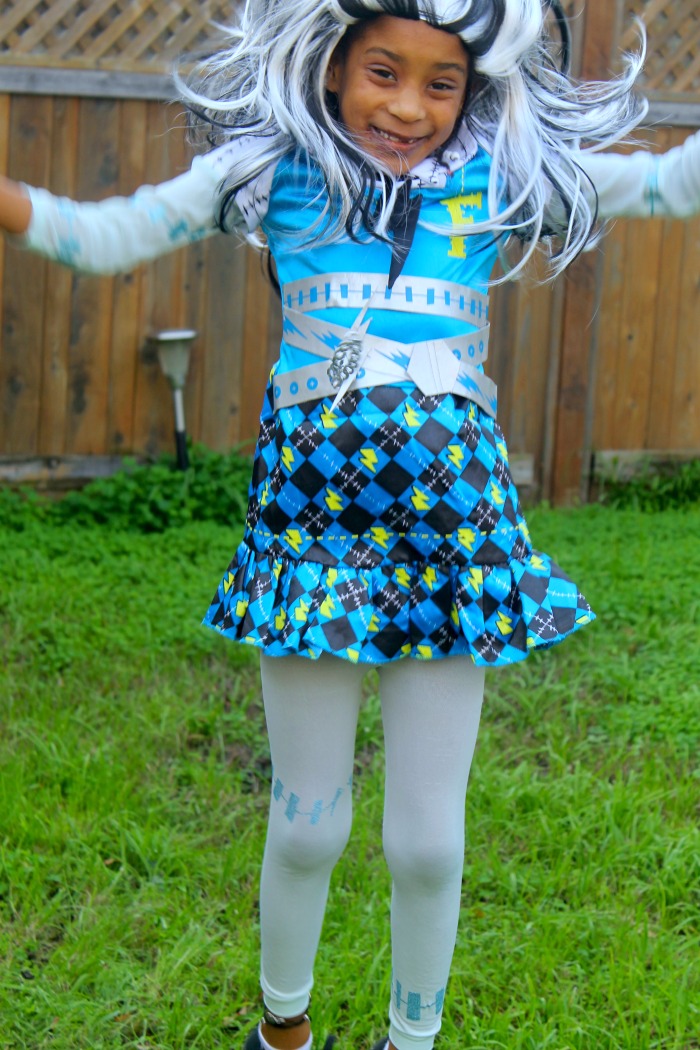 Monster High is a place where everyone is welcome. When I asked Ayva to tell me about them, that’s the first thing she said. She also had a lot to say about how the ghouls work hard to be good friends to others, and that they accept anyone who comes to their school. Ayva had no idea why I was quizzing her about Monster High, but I was so glad that this was her response without any prompting at all. See, that’s the type of message that I want my daughter to be receiving through the toys she plays with or the shows she’s watching.

There are so many negative influences in the world trying to infiltrate my daughter’s safe little bubble, that I cling to anything that is fun, meaningful, and positive at the same time. The girls adored the Monster High dolls’ outfits, makeup, and accessories, and I fell in love with the message of acceptance and diversity. Monster High is a win for parents and kids! 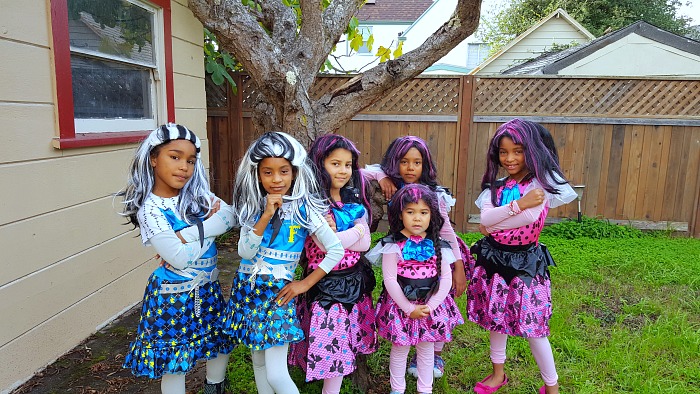 I had no idea the idea of being yourself was the basis of Monster High. Before this article, I had just dismissed the dolls as another dolls for girls but with a ghouly look. You've done a great job of helping me look beyond the appearance of the doll, to not judge a doll by its look but to look for the story behind the dolls. What an empowering party you held for these young ladies. I am sure they will treasure the memory and their dolls in the years to come.