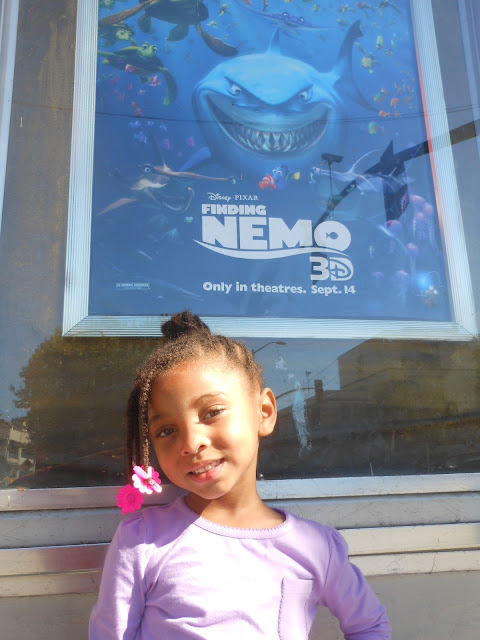 When “Finding Nemo” came out nearly a decade ago, I’m pretty sure I went to see it in the movie theater. Maybe. See, the thing is, I think I saw it, but going today to watch it again with Ayva, I didn’t remember anything about the plot at all! I do remember the little fish’s name was Nemo, but other than that…nada. Anyway, even if my memory didn’t fail me, there was no way that I was going to get out of seeing it again, not after Ayva saw the commercial for it!
It’s so difficult lately to know whether movies that are marketed for kids are actually, really kid-friendly, and I’d heard some things about “Finding Nemo” that made me think that I should be cautious about taking my 3 year old. Her persistence won out, though, and since the neighborhood theater was playing it, I caved in and took her today. So, was it a good movie for a 3 year old? Well, yes. And no.
YES
NO
Just like with anything else, I’d encourage parents to make their own decisions. I don’t regret taking Ayva to see the movie.  We left the theater in the beginning when the music startled her, but she asked to go back in, and on the way home, she was super chatty about all of the positive parts of the movie. She seems really interested in learning more about fish, so if nothing else, she was exposed to something new. Are you going to take your little one to see “Finding Nemo”? Did you take them already? What did they think? Take a look at Ayva’s review, and then leave a comment!
Click here to cancel reply.