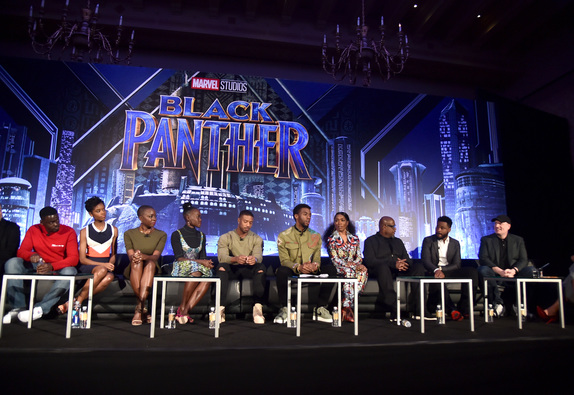 When you have the opportunity to walk the red carpet and go to the world premiere of a movie like Marvel’s Black Panther, it’s a day that’s kind of hard to top. I can tell you what comes close, though—attending a press conference and having the opportunity to peek into the brain of the movie’s stars, director, and production team.

My friends and I were on cloud 9 after the premiere, and the press conference had all of us feeling even more like we were all the way up! Both interesting and inspiring, I left the room with ideas for my own business thanks to these creatives sharing more about their process.

Attending the press conference was also a reminder to be grateful for the opportunities that I’ve had and will have in my career. Every person sitting on the stage at that press conference showed incredible humility and gratitude for their positions. It was a blessing to be in the room.

Here are a few of the quotes from the press conference that stood out and influenced me the most.

Question: What was going through your mind, and how were you feeling when you knew the lights were about to go down, and we were about to experience Black Panther?

Lupita Nyong’o: I’d been waiting a long time for this. And I was just so, so, so excited, because this was a movie that we all felt a lot of ownership of, and that we thoroughly enjoyed making. And you know, when you make a movie like this of this scale, so much happens between the time you perform it and the time you see it, you know – all the computer graphics stuff. Wakanda was built in, you know, in a room with Ryan and the incredible design team, you know. And so to see it alive, to see it almost like three dimensional was what I was looking forward to.

Ryan Coogler: I just felt incredibly blessed to have had the opportunity to make the film this way, to make the film with this studio. Working with Kevin and his team – Victoria Alonso, Louis D’Esposito, and Nate Moore, has been an incredible opportunity.  It’s not something I ever imagined would happen.

It’s good to work with my mentor, and these people who I’ve watched for my whole life, and some friends that I’ve made through this process.  It was incredible, when I had like 50 of my family members there, all from the Bay area; they were  talking at the screen.

Question: Why Chadwick for Black Panther?

KEVIN FEIGE:  I think you hear people say this all the time when you’re in a setting like this.  But he was the only choice. , we were sitting around a table, we were coming up with the story for Civil War – Nate Moore, our executive producer, thought – suggested bringing in Black Panther, because we were looking for sort of a third party who wouldn’t necessarily side with Cap or side with Ironman.  And almost instantly, we all said Chadwick. 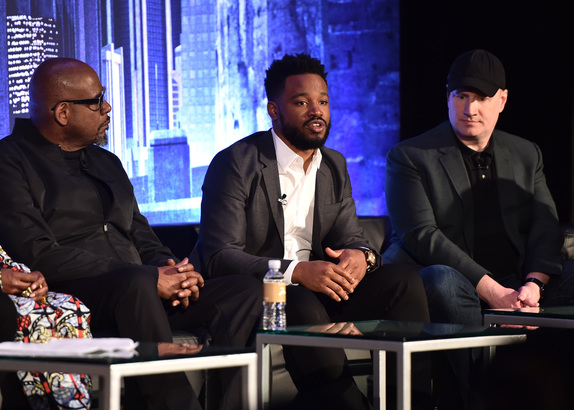 Question: How proud were you to see yourselves up, being so powerful, and so beautiful, and so regal on that screen?

Angela Bassett: Extraordinarily so.  And so pleased that this story, written by Ryan, and Joe Robert Cole, and Marvel, that it supported that.  You know, in African culture, they feel as if there is no king without a queen.  And I think in this story, it highlights the queen, the warrior, the general, the younger sister. I was so proud to have my daughter, and my son there last night, because in their faces, and in their spirit – and they were feeling themselves. And they stood taller after last night.

Danai Gurira: When Ryan sat me down and talked to me about his vision, and the story, and the characters, and the women, I was just floored. You don’t actually get to hear that often.  You don’t actually get sat down and hear that type of a vision.  And then it embodied with us being on the continent, women from the continent, but very developed, very complex.  It was amazing.  I mean, like, this is something else! I just want to watch it.  I get to be in it?

There’s so many great things I could say about how Ryan developed these women characters, and allowed us to collaborate. I feel really blessed about, and excited.

Question: Shuri is like the brains behind the whole operation. Do you think she’s smarter than Black Panther?

Letitia Wright: What I love about how it was written is that the men are always behind the women.  No one’s like undermined. The men aren’t like, ‘You shouldn’t be in technology, and you shouldn’t be in math.’  They’re like, ‘No, go ahead.’  So T’Challa is like, ‘Go ahead, Sis.  This is your department.  This is your domain. Kill it.’  But she’s cooler than him, but not smarter than him. 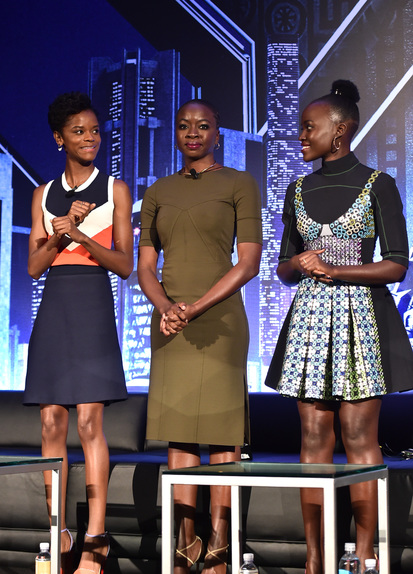 Question: You’re presenting a lot of very relevant social themes like isolationism and a lot of societal issues. How far did you want to take it?

Kevin Feige: Well I think it’s happened for the comics, it’s happened with the movie.  Ryan wrote this for the most part, you know, a year and a half ago, two years ago so things have happened in the world which makes the film seem more relevant.

There are other things in the film that have been relevant for centuries, but the truth of the matter is Stan Lee and Jack Kirby and the whole Marvel bullpen created Wakanda and created T’Challa and created Black Panther and made him a smarter, more accomplished character than any of the other white characters in the mid 1960s.  So they had the guts to do that in the mid 1960s.  The least we can do is live up to that and allow this story to be told the way it needed to be told and not shy away from things that the Marvel founders didn’t shy away from in the height of the civil rights era. 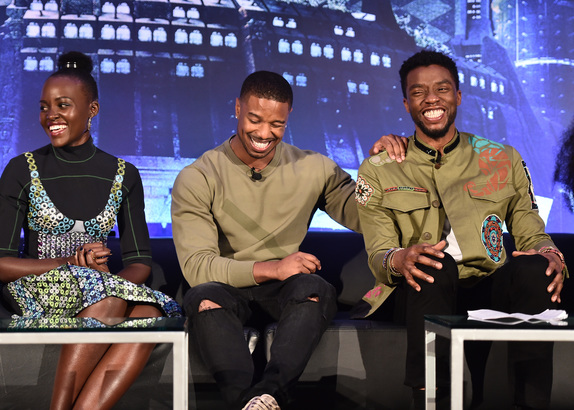