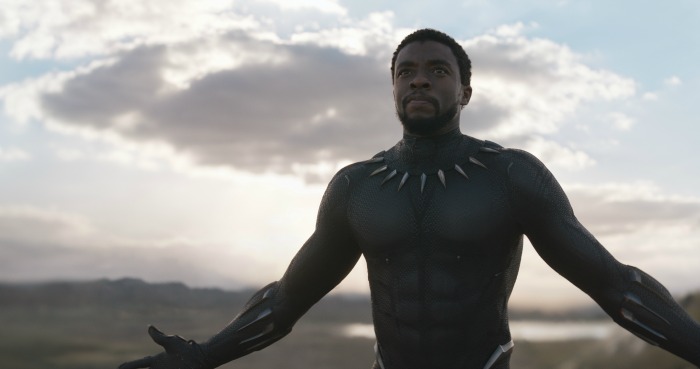 From the moment the words Oakland, CA crawled across the bottom of the screen at the beginning of Marvel’s long awaited Black Panther movie, I knew this was going to be a different type of super hero movie. While many of the folks who have been freaking out over Black Panther getting his own film since Captain America: Civil War are comic book fans and self-proclaimed nerds, I’m neither. I’m just an old theater head who loves all things black, and am easily moved by a good story.

Black Panther definitely has a good story. It reminded me a lot of the tragedies that I read in college with their mighty but flawed characters. Although Chadwick Boseman’s Black Panther is one of the more poised and put together super heroes, he’s certainly not perfect. Michael B. Jordan’s character Eric Killmonger wastes no time in pointing out Black Panther’s shortcomings. For one, he’s the King of Wakanda, a fictional African country that is more technologically advanced than any other place in the world. Rather than use their resources (including the impenetrable vibranium) to help others, Wakanda remains powerful because they choose to stay isolated.

Even if you’re not a Marvel comic book fan, or missed the Captain America movies, you’ll still appreciate Black Panther. The story is one that stands on its own with a clear beginning, middle, and end. While there are some characters with history (like Black Panther nemesis Ulysses Klaw), there’s still enough information on their past relationship that you won’t feel lost.

Many of the themes in the movie were incredibly relevant to society today. It doesn’t hit you over the head with social commentary, though. The film is still an entertaining tale about a super hero. There might be some political statements being made along the way, but it never feels heavy.

The women in the movie are so incredibly interesting and three-dimensional. In a weaker storyline, they’d absolutely steal the show. Fortunately, T’challa’s dramatic journey has enough depth to keep us focused on him. Chadwick Boseman plays T’challa with an air of royalty that doesn’t require a lot of hooping and hollering. Of all of the characters, I believed Boseman’s King T’challa the most. He played Black Panther with a quiet strength that was intoxicating to watch.

Michael B. Jordan as Killmonger was completely delicious. Although he was the villain, I can admit that there was a point where I was rooting for him to win. Not an evil character, Killmonger’s reason for being who he is and doing what he does completely makes sense. It’s scary that I can relate to the bad guy, but that’s just another testament to the richness of the story. 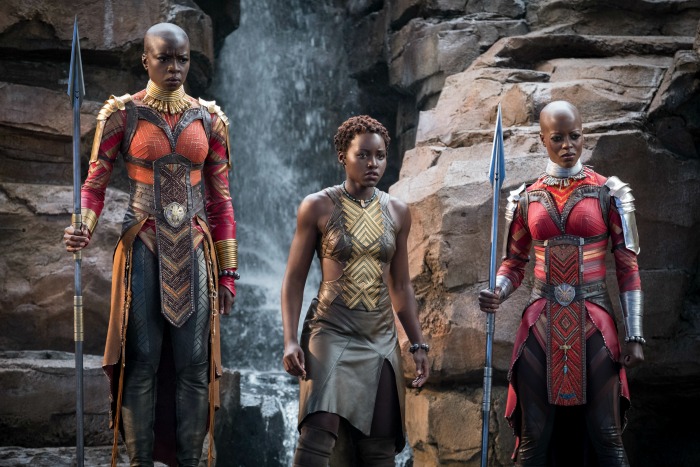 The women of Wakanda

From Lupita Nyong’o as Nakia, Danai Gurira as Okoye, to Angela Bassett as Ramonda and Letitia Wright as Shuri, the women of Wakanda are not to be messed with. Okoye is the General who leads the Dora Milaje, T’challa’s security team. She and Nakia, who is T’challa’s old flame, aren’t really friends as much as they are two women who have an incredible amount of respect for each other. All of the women are represented as having their own purpose and individual drive.

The standout of the film, and probably my favorite character, is Shuri. The smartest person in the world, Shuri is T’challa’s little sister, and the creator of his vibranium suit. Letitia Wright plays her as a modern millennial who really enjoys making miracles through technology. She was a breathe of fresh air in every scene that she was in. Letitia held her own among the older, more experienced actors, and I imagine little girls will be running around pretending to be her after they see the film. 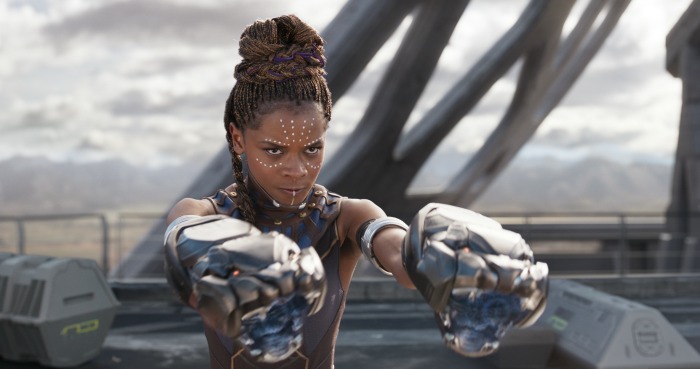 Marvel’s Black Panther is worth all of the hype for the girl power alone. As I tweeted the day after viewing the movie, “I can finally process what I saw last night. Black WOMEN presented as heroes. Our own heroes. SUPER heroes. We were the smartest and strongest people in the screen. Y’all—we have never seen US like this before.” 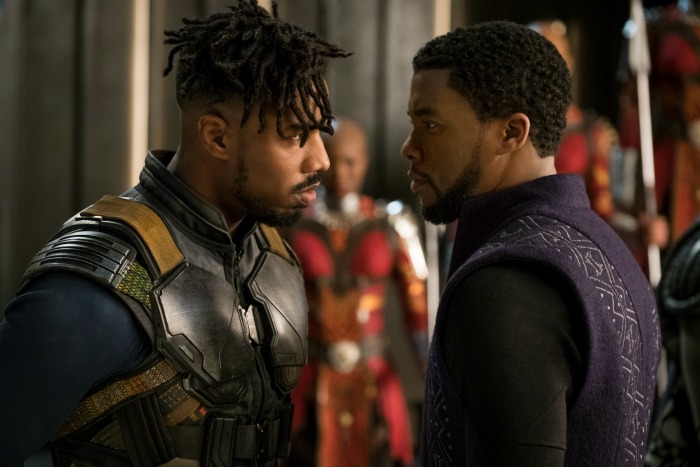 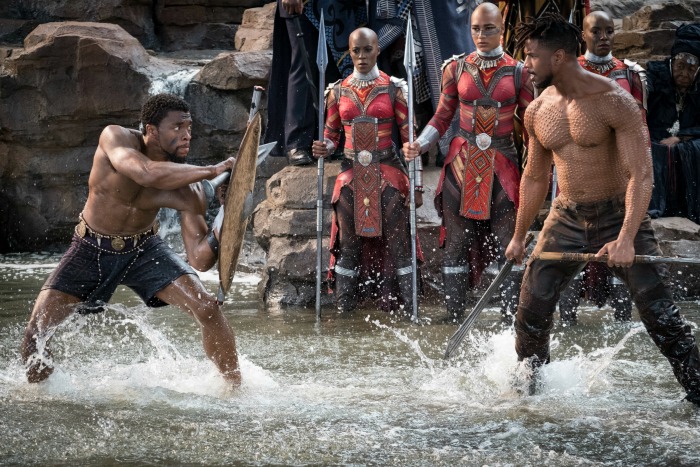 Is Black Panther okay for kids?

Black Panther is rated PG-13 due to prolonged sequences of action violence, and a brief rude gesture. I believe the rude gesture was when one of the characters flipped another character off. My 8-year-old daughter wouldn’t know what that means anyway. If your child does understand the meaning, they probably know enough to know that it’s not appropriate in regular life.

The battle scenes weren’t much different than other Marvel films, but there were a couple of instances where I covered my eyes. Keep in mind that I’m a big scaredy cat and am not a huge action movie person in the first place. In addition to fantastical movie weapons like Shuri’s vibranium gauntlet, there were also real guns depicted in several scenes.

Other than that, I feel like a lot of the violent innuendo in dialogue would go over most kids’ heads. There isn’t any nudity or uncomfortable sexual situations. Black Panther is a true super hero movie. There are good guys and bad guys, but no one is shown to be truly evil.

That being said, every child is different. If your kiddo can handle Captain America or Star Wars, they’ll probably be fine. If nothing else, there’s a lot of opportunity to open up conversation about Africa in the real world, family relations, and making choices.

Is Black Panther as good as I thought it would be? 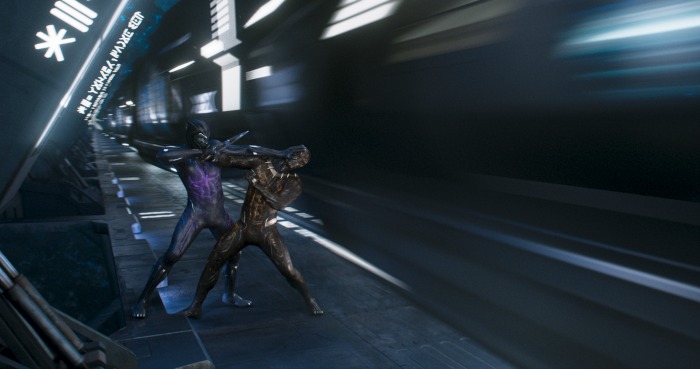 Overall, Black Panther was everything I think we all wanted it to be. It’s one of the smartest, more modern Marvel films I’ve seen. There was great care taken to ensure the integrity of the characters, even while fleshing out Black Panther’s life for us to know more about him. The fight scenes felt true to the setting of Wakanda, and I appreciated the costumes, accents, and depictions of Africa that are sure to challenge some folks’ thoughts about the continent.

Black Panther opens in theaters everywhere on February 16th. Maybe I’ll see you at the theater on that day because I’m definitely going to go see it again!

Want to read about my Black Panther red carpet experience?