You know a movie is good when its supporting characters are as interesting and well-developed as the hero. In Marvel’s Black Panther, there are several characters like that. Andy Serkis’ Ulysses Klaue, and Winston Duke’s M’Baku are two of the audience’s favorites, and I had a chance to sit down and talk a bit with them about how their work on the movie.

Question: What it’s like to bring to life these crazy characters on screen?

Andy Serkis: It is great fun being able to dip into the dark side, because it’s in a safe environment.  We work in the world of story where you’re allowed to do that.  What I wanted to do with this character, with Klaue, was not make him in any way a kind of an archetypal villain or considered evil, although of course he is one of the world’s worst, because he is entirely driven by being selfish.  He really epitomizes what it is to be ultimately selfish in every aspect of living.

He’s one of the world’s takers, he just grasps and pulls and brings it all to himself. I wanted to make him sort of strangely someone you might like to hang out with.  And then- and that sort of tension for me is more interesting than playing him as a complete bad ass, you know, who’s just threatening and nasty. As an actor you’re wanting to challenge the perception of good and evil.

Winston Duke: With M’Baku, I was given the opportunity to create a new language within that world essentially. The one thing that Marvel did great that really grounded and created a new world, a new life for M’Baku was that it was a departure from the comics in a sense that it’s no longer this M’Baku being the leader of this religious minority.

Question: How does it feel to see the fan engagement all over the world, even in this supporting role?

Winston Duke: It’s an excitement to know that people, and not adults, but children are going to be exposed to narratives like this.  Before they’re fully developed and before they’ve ingested and consumed placed narratives, narratives that were formed before they were born about them. They’re getting to see representations of people who look exactly like them. Before they’re fully formed, which is going to help them see their world differently.  It’s going to change their paradigm from a really young age.

They’re watching this and going “Man,I could be like that!” and  “T’Challa looks like my uncle.” Children in Tobago are getting to see that, people in Trinidad, people in Brazil, people in Latin America, people all over the diaspora are going to get to see this and develop agency. That’s exciting.  And I was just watching and being like, this is wonderful, it’s a great time to be in a super hero movie. 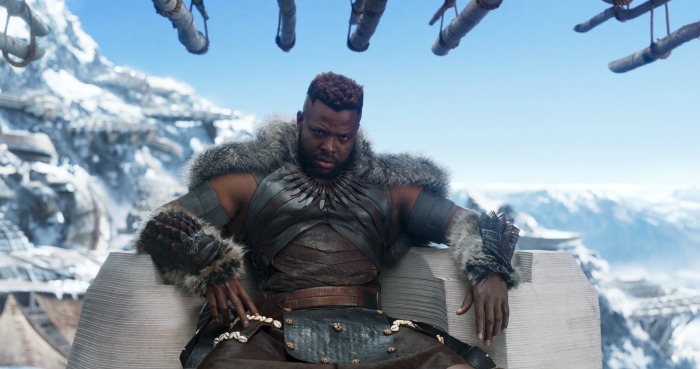 Question: This is the absolute perfect cast for this movie, how were you cast?

Andy Serkis: The way that I came on board actually was when I first started working with Joss Whedon who’s directing Avengers:Age of Ultron, it was using performance capture. I was helping Mark Ruffalo with the Hulk.  They came to our studio in London called the Imaginarium and we were working with him and then James Spader to create the character Ultron because it was using the technology that I’m very familiar with.  Then Josh said “there’s this great character which I’d really love you to play, it’s only a small scene. But I think if the Black Panther movie comes on, you know, he’s very much an adversary for T’Challa in the Black Panther”. I said oh wow that’s great.  That’s how I came on.

Winston Duke: Since I was more of a unnamed actor, and I went through the standard audition process.  So I’m only hearing about Black Panther and seeing the cast come together. I told my representatives, I’d just love to get in that room.  I love Ryan Coogler’s work, I think it has a really strong sense of social justice, every single thing that he does.  And I want my career to have a strong social justice footprint, even if it is commercial.  I want it to be connected in some ways so I kind of expressed that mission for myself and my career.