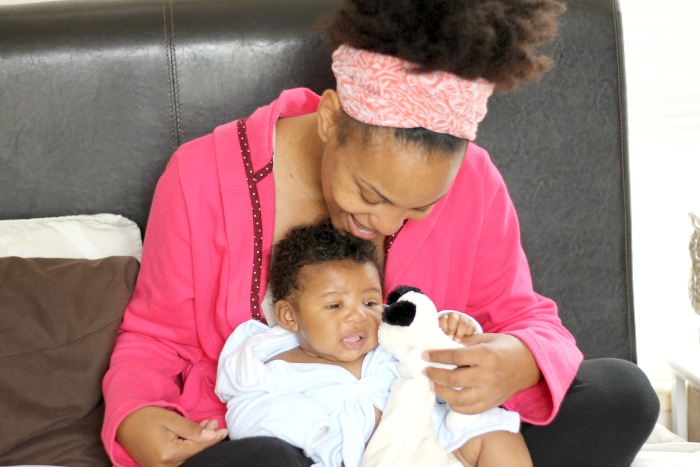 For as long as I can remember, my happy place has been in the shower. I would take two, sometimes three, every single day. Something about the water made me feel calm when I was anxious.

It inspired me when I was blocked. Most practically, it warmed me up when I was cold. Nothing or no one would get in the way of my beloved showers. Ever.

After I had my daughter, even though I was alone with her most of the time, I got creative to find a way to get those precious showers in.

When she was a little baby, I would leave her in her crib and turn the television on. I could get a good 5 – 8 minute shower in with no problem. As she got older, I’d put her in her high chair right at the bathroom door, give her a handful of Cheerios, and go meditate in the water.

That’s why I could never understand why some moms would say they hadn’t showered in days. I’d be like, “Sis. What is you doing, baby?” In my mind there was never any reason to miss a shower.

You might have to be a little flexible in how it happens, but for it to not happen. I didn’t get it.

Now that I have two children, I get it.

Listen, y’all. First, everything changes when you increase the number of children you have. I find that my days go by faster because I’m working to feed more people, get more people dressed—shoot, I’m doing everything twice!

Then, my second child is nothing like my first child. He has never stayed in his crib for longer than 6 minutes, and he would never go for sitting in his high chair alone while I was behind a closed shower door.

Most importantly, though, is that I just don’t feel like showering sometimes. If I have a few moments of down time, and everything has finally winded down for the day, a shower almost feels like an intrusion on my me-time.

I could be laying on the bed looking at the ceiling, or hiding in my room so I don’t see any people. There’s no limit to the ways I can spend my time when the children are asleep or my husband takes them to run an errand.

Taking off my clothes, getting in the shower, drying off, putting on lotion, and then finding something else clean to put on feels like work when I could be relaxing.

That’s not to say that I don’t shower anymore. I do. Just not as much as I used to.

I’m on a less than twice a day, but more than twice a week schedule at this point. There are definitely some days when I put my deodorant to the test, but I don’t think I’ve ever allowed myself to get too funky.

Motherhood is full of constant opportunities to learn humility. All of the judging I did on other moms, now I’m praying they don’t judge me. Also, I’m praying my deodorant keeps working, because stinky pits would totally be something to judge me about.