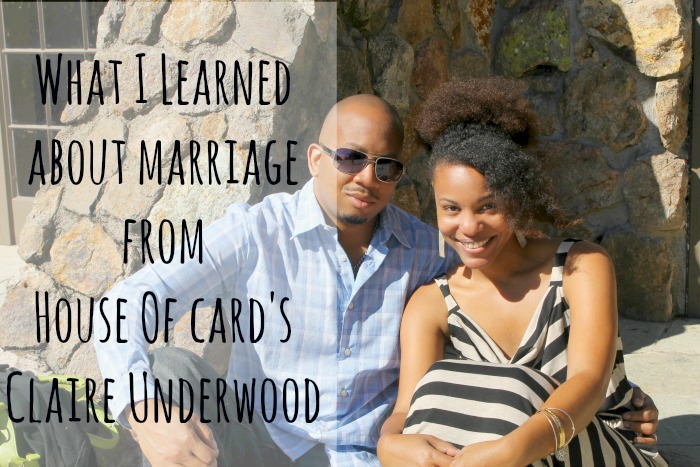 As a semi-new wife, I’m always looking for positive examples of marriage to use as a guide in my relationship. The wives at church, different friends and family, if you’re a wife who’s doing marriage right, I want to know about it. One wife that is doing something is Claire Underwood from the Netflix series, “House Of Cards”. Although she’s calculating and sometimes pretty darn evil, there are still a few important lessons that wives can learn from her.

Conflict Can Be Productive

Growing up, most of us are taught that conflict is bad. Claire Underwood knows that’s not the case. She isn’t afraid to really dig into tough issues regardless of the topic, and even if it’s with her husband. Claire gets that dealing with problems head on can actually help to keep a relationship healthy. There’s no passive aggression, no secrets, when something’s wrong you say so, and then start solving the problem. Terrence and I don’t have a lot of conflict, but when we do, we always end up coming out stronger on the other side of it. Now, Terrence has never slept with another woman or killed anyone, so I can’t say how we’d get through that conflict, but if Claire and Frank can get through it…Wait. Nope. I don’t play that.

Encourage Your Husband To Go After His Dreams

Terrence has a fantastic job that he loves, and he’s really looking forward growing with the organization. I’m here to support and encourage him when he shares his dream of moving up in the company, and to make sure he stays on the path to achieving his goal. When Frank let Claire know his desire to become President of the United States, she not only encouraged him, she assisted him with going after it. Mrs. Underwood was not going to let anything get in the way of it, not even Frank himself. Remember when he tried to get soft on her in Season 2? Claire reminded him of her sacrifices and let him know he needed to get his mind right and man up just like she had. And didn’t Frank get what he wanted? Go ‘head, Claire.

Even before we were married, Terrence knew that I had introvert tendencies. There are times when I’m peopled out and just can’t go to another event. For the last couple of years, though, I’ve been being a lot more open and adventurous when it comes to doing some of the things that Terrence likes to do because variety is the spice of life in a marriage. Claire Underwood understands that, too, as evidenced by the ménage a trois she and Frank had with his driver. The next day Frank seemed to be experiencing less stress, and was more relaxed than he had been in episodes past, so clearly Claire’s open-mindess benefitted her husband tremendously. You don’t have to go that far, but the next time he makes a suggestion for something a little extraordinary, maybe just give it a try? Just this one time?

Season 3 of House Of Cards is now streaming on Netflix.

I am a proud member of the awesome Netflix #StreamTeam. I receive promotional product for participation.

What a fun way to look at this couple....that come across so crazy and yet so loving an caring of each other.

Thank you! Yes, they are CRAZY, but there's a lesson in everything.

I've heard so many great things about this show, but we don't have Netflix - yet. We're about to get rid of cable and make the move to streaming TV so I'll catch up then and learn some "wifey" lessons from Claire!

Netflix is the bomb, Joyce! Totally can do without cable if you have it!

Wow! Great post!! Definitely agree with talking out issues honestly and becoming stronger for it! Also, giving your partner room to reach their goals and be happy! I never really thought of Claire this way, but it's so right on! Awesome!

Thank you, Kristin! Yes, Claire isn't necessarily the "model" wife, but she can teach us a few things! Ha!