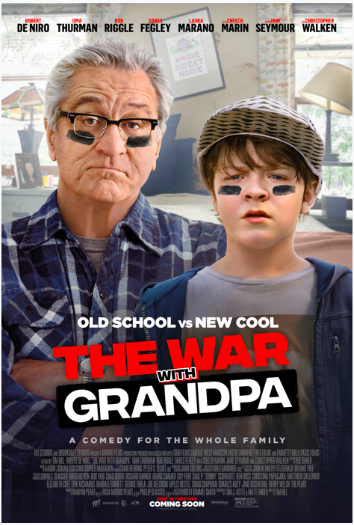 It’s been a long time since an old-school family movie has come out. You know the kind I’m talking about. Hijinks. Bratty kids who aren’t necessarily who you’re rooting for. Mistakes and not always PC humor.

In addition to having the opportunity to watch the movie at home, Ayva and I were able to interview the producers. We have great information about the film straight from the producers’ mouths! We even got to hear from the 15-year-old producer who came up with the idea for the movie in the first place!

Tell us about the movie.

ROSA PEART: It starts with a grandpa who gets into trouble. His daughter has to go and rescue him and decides, “hey you should come live with us.” So he’s committed to come live with her family in the house, but it’s not a big house. So, he has to take her son Peter’s room. Peter does not like that idea. He wants his grandpa out of his room by any means necessary, so he wages “war” on him.

Where did the idea of the movie come from?

TRE PEART: It was a school assignment and for the assignment, I was reading this book called, “The War with Grandpa.” There was this rule that my mom my dad made for me. I had to read the book before I watched the movie if there was a movie that was attached to the book. Once I was done reading the book, I was so super excited to watch the movie because it is one of my favorite books to this day. I’m looking through the internet trying to find the movie and I just couldn’t find one. So now I’m thinking, “how am I gonna watch this movie?” That was my original goal.

ROSA PEART: That’s the reason why we made it.  At the time I was getting tired of just going to see animation all the time. I thought it’d be nice to see a live action movie that everybody could enjoy.

How can other kids get adults to listen to their big ideas?

TRE PEART: I gotta say I did get lucky having parents who were willing to listen and keep me involved throughout the process the entire time. You should keep working, take classes, find people who are in the business. There’s always people looking for opportunities to make movies.

Any last thoughts about the film?

MARVIN PEART: This is a family movie for a family experience. If you get out, you go out just make sure you go out in a safe way. Please wear a mask to help distance from people you’re not familiar with and just. Be safe in doing it and we encourage you to see it but be safe doing so.

Is the war with grandpa okay for kids?

The War With Grandpa is rated PG due to rude humor, language, and some thematic elements.

There was definitely some cringeworthy rudeness, but honestly, it’s nothing worse than the stuff we used to watch in movies like Home Alone.

We weren’t fans of Peter. My children and I found him to be especially selfish, but that was kind of the point of the movie. I appreciated that my kids were able to recognize that his behavior was uncalled for.

Like I said above, though. This is an old-school style movie, though. We laughed out loud, screaming and hollering at some points. It was hilarious and great for the entire family. Kids included.

About the war with grandpa

From the studio: Sixth-grader Peter (Oakes Fegley) is pretty much your average kid-he likes gaming, hanging with his friends and his beloved pair of Air Jordans. But when his recently widowed grandfather Ed (Robert De Niro) moves in with Peter’s family, the boy is forced to give up his most prized possession of all, his bedroom.

Unwilling to let such an injustice stand, Peter devises a series of increasingly elaborate pranks to drive out the interloper, but Grandpa Ed won’t go without a fight. Soon, the friendly combatants are engaged in an all-out war with side-splitting consequences.

The War With Grandpa opened in theaters on on October 8, 2019 and stars Oakes Fegley as Peter, Robert De Niro as Ed, and is produced by Marvin Peart, Rosa Morris Peart, Phillip Glasser, and introducing 15-year-old producer Tre Peart.