You are here: Home / moms / The Unintentional Horror Of The Elf On The Shelf
0 shares 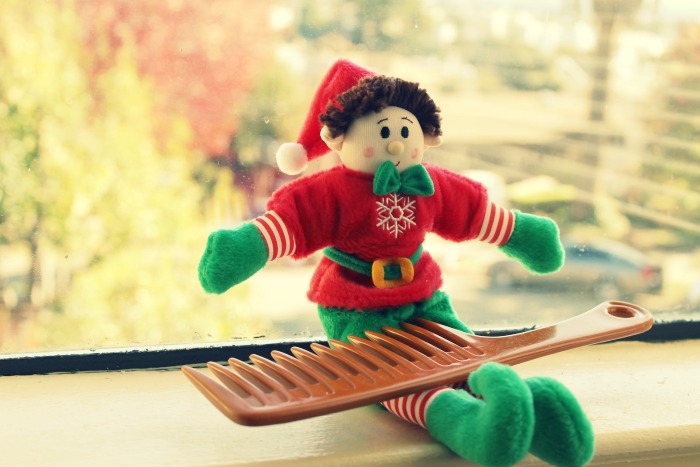 Our family has quite a few holiday traditions.  We love to watch “Elf” on Thanksgiving day. Then, Terrence and his mom go out shopping early in the morning on Black Friday, and I go out later that evening after the crowds have died down. There’s hot cocoa just about every day for nearly  a month, and we love to drive around to look at the Christmas lights on houses. Even though we already have a few tradition, I’m going to take it up to a whole ‘nother level this year by introducing the Elf On The Shelf. Now, folks either love or hate this little guy, but after years of seeing moms share photos of their creative, and sometimes dramatic, scenes with their Elf, I decided to just go for it.

For some reason, I was really feeling the holiday spirit last night. It might have something to do with the fact that our Christmas decorations are already up, but I kind of forgot that we still have 38 days until the big day. I told Ayva that now that she’s 5, a Christmas elf would start coming to our house to help her get ready for Christmas. I said that he’d be a toy during the day, but at night, when she was sleeping, he’d come alive and leave little surprises for her based on if she had a good day, or if she was being disobedient. Of course she asked for examples. I told her that he might leave stickers if she was really listening, or a little note to tell her how sweet she was being. If she didn’t have a good day, he’d do something naughty. She seemed cool with that answer, and moved on to the next topic of conversation. I had no idea she was still thinking about it until this morning.

When Ayva woke up today, the first thing she said was, “Did the elf come?” I had polled my Facebook friends, and decided that our elf isn’t coming out until at least the end of next week, so I told her no. Then I let her know that it’d be awhile but she should keep her room clean because if he comes and it’s not clean, he’ll go back home. Yup. Sure did. And I’m not ashamed of it, either!

Will He Hit Me With A Hammer?

The next thing she asked me made me realize that maybe I wasn’t exactly clear on how Elf On The Shelf works. This is the conversation that has me thinking that:

Ayva: So, if I’m naughty, will the elf do things to my body?

Me: No! Of course not! If anyone touches your body, you tell me. As for the elf, I don’t play that. If he touches you, I will kick his butt out of this house.

Me: Would the elf use a hammer on your body?

Ayva: Yes, if I’m naughty. Would he use a hammer on my body?

Me: Definitely not. He’ll do something naughty to us, to our home, like he’ll dump cotton balls on the counter.

At this point, homegirl did not look impressed. While I certainly didn’t mean to spook her with thoughts of a hammer-wielding elf who beats bad children in their sleep, I still would like to maintain a little leverage. I mean, shoot, if I have to move this elf every night for several weeks, I want to get something out of it, too. I thought, and tried again:

I paused for a couple of reasons. First, I didn’t want to say something like toss flour over the kitchen, because ain’t nobody got time to be cleaning up no flour. Second, I’m realizing I probably should never have mentioned this dang elf until I had my story straight. It finally hit me, though. I knew the one thing I could say to my thick, coily headed little girl to make her behave all season long:

Me: Like, if you’re naughty, the elf will hide the blue comb and then I have to use the brown one to comb your hair.

Boom. As I brush off my shoulders and pat my back for being such a clever mom, I’m excited to start a new Christmas tradition. It’s just a fun way to engage with Ayva, be able to be creative and add a little whimsy and magic to the season. And guaranteed good behavior. You can’t beat it (with or without a hammer)!