My grandmother used to make the most amazing pot roast. My memories of her roast are practically three-dimensional. I remember everything about how that piece of beef looked, smelled, and tasted. The luscious brown juice dripping off of it, salty, savory…that was some good eatin’, y’all! Last week I got the urge to make a pot roast. Well, to be honest, I got the urge to eat a pot roast. Once I realized the only way I’d get to eat it is if I cooked it myself, I started the quest to figure out:
A. What exactly is a pot roast?
B. Where do I get a pot roast?
C. What do I do with the pot roast when I figure out what it is and where to get it?
Listen, we’re not going to talk about the fact that I am a grown woman, a grown BLACK, SOUTHERN woman and I, up until recently, didn’t have the answers to those questions. Apparently I missed that part of the Grown Woman Orientation Seminar, but no worries, because Facebook had my back! Back in the day, whenever I had questions about cooking, I’d pick up the phone and call my grandmother. She was all that, y’all! It didn’t matter how ridiculous my cooking questions were, she never made me feel stupid for asking. My Grandmom is gone now, though, and I was feeling too personally connected to pot roast to just Google any old recipe. I went on Facebook, to my peeps, and let me tell you, they had my back!
Folks were chiming in left and right. Use a Crock-Pot. Jeanne suggested that I add a packet of Lipton Onion Mix. My friends Tarsha and Tyra both inboxed me and offered to be on the phone with me if I needed them. My girlfriend Urshala pumped me up with a “You got this!”. My partner,Arelis, Instagrammed a box of roasting bags so that I’d know what they were. My blogger friends Stephanie, Jo-Lynne and Heather forwarded links to blog posts that they had written for me to use as a resource. And even the fellas got involved! James is a military man, so his straightforward approach helped me get grounded. Ryan added a bit of comic relief (and forwarded a recipe, too!). Ricardo even offered to be my Puerto Rican House Chef!  And Pam…Pam is my roasted meat rock. Sarah suggested adding a twist with cinnamon, and Bay made me feel better about waiting 34 years to make a pot roast! Erica and Sherry gave me a couple of ideas on simple, but yummy seasoning, and Shelley gave me step by step directions (which  is why I love her so much).  Mel gave me another suggestion, pork, and maybe I’ll make that for T since this worked out so well! These folks really, really hooked me up! 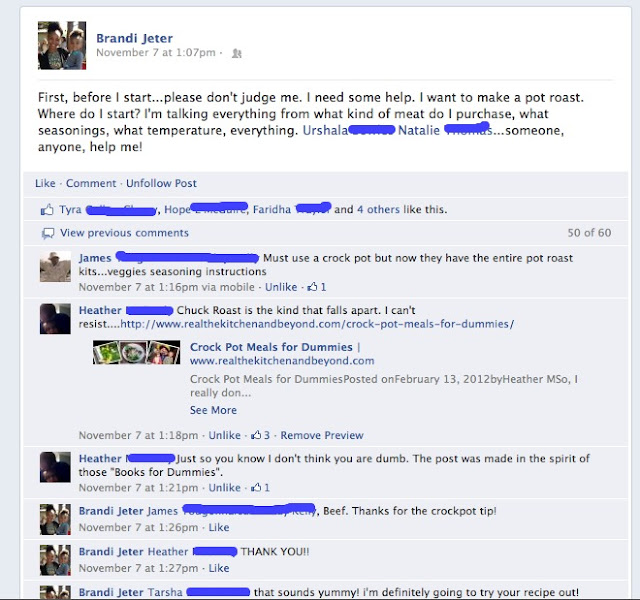 Armed with a boatload of knowledge and tips, I made my first pot roast yesterday. Ayva and I went to the grocery store early in the morning to pick up the chuck roast, and some potatoes. Then we came home, chopped up the other veggies, seasoned our meat, and put everything in the Crock-Pot to cook for 8 slow hours. As our home filled with the smell of the roasting beef, onions, and garlic, my heart swelled with gratitude for the folks who chimed in to help me take a edible walk down memory lane. You know, so often we hear that social media is really taking the “social” part out of life, but I have to disagree. This pot roast journey of mine could have been a sad, emotional ordeal, but instead, it became a lively conversation, and joyous quest.
See, I know that my sudden, insatiable craving for pot roast has a lot more to do with missing my grandmother than it has to do with wanting pot roast. As the years pass, I find that my heart doesn’t ache as much or as often as it used to with missing my grandmother. Instead, I’m starting to be blessed with these amazing memories of her that pop up suddenly that remind me of something she used to do, or say, or make. Like pot roast. It’s strange when I have these memories, because they’re happy occasions, things that make me smile to remember about her. At the same time, though, because she isn’t here anymore, it can be outrageously painful. But this pot roast memory…this was a good one. And my friends on Facebook, they helped me to have fun with it…and I’m grateful for that.
I’d like to dedicate my first pot roast to my Facebook friends. Just in theory, of course, because there’s only a few leftovers and we’re having that for dinner tonight, but, I’ll be thinking of you all tonight as we finish it off.
And my Grandmom. Of course.

*Oh yeah, and there are no pictures of my roast. Seriously, it looked like pot roast. Not that impressive looking. But really delicious!!