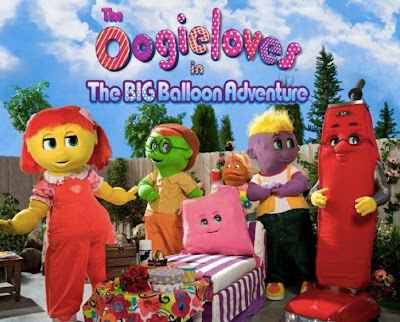 Ayva and I attended a screening of the new movie, “The Oogieloves in The Big Balloon Adventure” today. The family movie is rated GGG because the creators put extraordinary thought and effort into being genuinely child friendly, as opposed to to some other films that have been marketed to children lately. In the film, the Oogieloves, Goobie, Zoozie, and Toofie, have to recover magic balloons that flew away before they host a surprise party for their friend, Schluufy. Yes, the names are silly, and yes, Ayva loved them. In addition to help from their friends Windy Window, J. Edgar (a vacuum cleaner), and Ruffy the Fish, there are also real life stars like Toni Braxton, Chazz Palminteri, and Cloris Leachman to help the Oogieloves out along the way.
Just this past weekend, my father took Ayva to the movies. Trying to find a movie that was vaguely appropriate for a 3 year old was a challenge. There were only 3 animated films to choose from, and I’d heard that 2 of those were too scary for little ones. I decided to send them to the film that seemed like the lesser of the 3 evils. Unfortunately, I was mistaken. My dad said that he looked over at Ayva about 15 minutes into the film, and she had a distraught look on her face. When he asked her what was wrong, she said that one of the characters was “too mean” and she didn’t like the movie. My dad packed up their snacks, picked up my little one, and they left the film with over an hour left to go.
This is just the type of situation that Kenn Viselman, the creator/producer of “The Oogieloves in The Big Balloon Adventure” and his team are trying to avoid with their movie. The film’s writer, Scott Sabile said that producers should be focused on showing laughter, light and love in children’s movies instead of darkness. They also encouraged parents to interact with their children during movies, and “The Ooogieloves in the Big Balloon Adventure” often broke the invisible 4th wall and invited the audience to get out of their seats and dance and sing along. Ayva and the other children in the theater really seemed to enjoy the film, and it was nice to leave and not have to explain why this character was so mean, or why that character died.
Since the movie doesn’t come out until next week, I’m not going to do a formal review, but I can say that Ayva really enjoyed herself and is still talking about it. Here’s a few thoughts from her about the film:

What do you think? Will you take your little one to see “The Oogieloves in The Big Balloon Adventure”? While you’re waiting for the movie to open, find out more on Facebook or Twitter. You can also follow the hashtags #oogieloves and #ratedggg.
Previous Post: « Why I Haven’t Posted In a Few Days – The Long Version
Next Post: The One That Got Away »