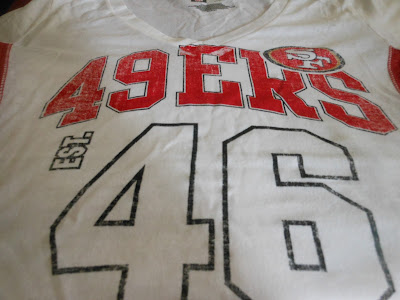 I’ll be the first person to admit that I don’t love football. Even as a cheerleader in college, I found the game to be a tad bit boring and lacking continuity. I mean, sure, there’s a burst of excitement for like, thirty seconds, and then it just…stops. We wait while the refs measure yards, wait while the team takes a time out, and then we wait during commercials! Anyway, none of my feelings about the game of football matter right now because I live in the San Francisco Bay Area, and OUR TEAM IS GOING TO THE SUPER BOWL! Who cares that I somehow missed the fact that the San Francisco 49ers were division champions, and just learned that they were going to the Big Game a few days ago? It doesn’t matter! Now that I know, I’m PUMPED (well, maybe not that pumped…but I’m excited that my friends and family are excited).

Since I know that there are many more folks out there like me who will be frantically trying to figure out “Who’s playing in the Super Bowl?”, I decided to put together a little cheat sheet for you to study before you go to a Super Bowl party, embarrass yourself, and annoy the other people who are there. No, seriously. Even as a non-football person, I can see how annoying it is when the other non-football people ask simple questions.

What is the Super Bowl?

Who is playing in the Super Bowl?

How did the teams get selected to go to the Super Bowl?

It’s kind of confusing, but in a nutshell, there are a series of tournament games within each conference. The conference winners (Conference Champions) play each other in the Super Bowl. If you fancy a more detailed answer, there’s a great one pager on dummies.com.

When is the Super Bowl?

This year, the Super Bowl will be on Sunday, February 3rd. Kickoff (the start of the game) is scheduled for 6:30 PM EST.

Where is the Super Bowl being played?

The Big Game will be played in New Orleans, Louisiana at the Mercedes-Benz Superdome.

Who are the players that I need to know?

Linebacker, Ray Lewis from the Baltimore Ravens is probably the main player that folks are watching from that team. He’ll be retiring this year after 17 colorful seasons in the NFL, and it’ll be a pretty big deal if he leaves with the Super Bowl ring. On the other side, Frank Gore, running back for the 49ers is who San Francisco fans will be rooting for. Apparently, he is the polar opposite of Ray Lewis, humble and quiet, but motivating and inspiring nonetheless. I’m sure there are other folks you need to know, but these two are a good start and give you something to talk about.

Who is performing at half time?

Beyoncé. As if you didn’t already know.

So, I hope this helps. At the very least, you’ll know when to show up for the Super Bowl party that you’ve been invited to because now you know when the Super Bowl is. Now, go out, buy some 49ers gear, and cheer our team to victory!