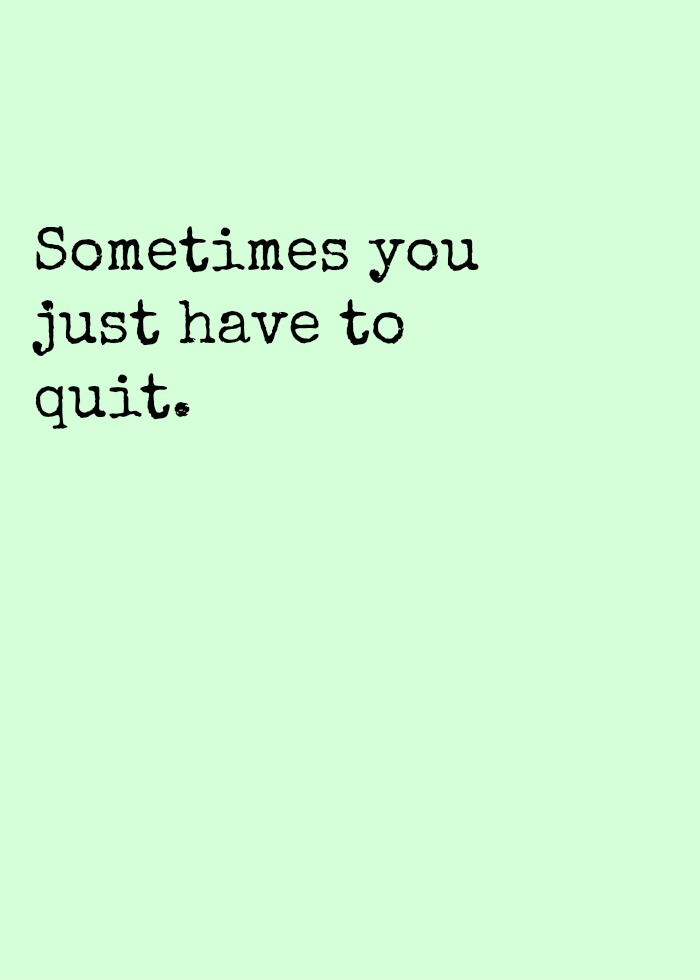 Last Wednesday was the first day in 10 years that I didn’t have a full or part-time job working for someone else. Certainly I’ve had some periods where my paycheck felt like I wasn’t working, but in reality, I’ve been gainfully employed for a decade. Leaving my job wasn’t something that was planned. I mean that to say, I wasn’t planning to resign without the safety net of another job waiting in the wings. It just happened one day because, well, it was time.

I’ve been really blessed to fall in with the right positions at just the right times. If nothing else in my life was going well, I could always count on kick butt jobs with incredible coworkers. Certainly there were challenges, but that’s to be expected no matter who you work for. There comes a point that things change. Once that happens, you have to assess the situation and make plans for what’s next.

I Stayed Too Long

When I look back to my previous position at a nonprofit in Philadelphia, I probably stayed about 2 years too long. The landscape of funding for nonprofits was very different than when I had first started. I came in to teach the arts, but because of funding, art was getting pushed further and further down the list of what was important. It sucked, but it made sense, and I understood and adapted. Unfortunately, the organization didn’t always adapt similarly, and the staff was often left with inadequate leadership and a culture  that was left over from the way thing “used to be”. I believed in what we had done, and knew that with some pivoting, the organization, and the children we served, could still be successful. However, I knew after a meeting when I was blasted for being too emotional because I wanted answers as to why our students’ reading levels were dropping, that it was time for me to go. I didn’t leave at that time, though, and spent another year fighting against (some) people who just had different values than I did.

As far as my most recent position, certainly the company changed, but really, I didn’t. I grew up at the nonprofit. I started as a starry eyed young lady who just wanted to have fun teaching kids about drama and art. When I left, I was a bulldog, ferociously advocating with a group of my colleagues for those same kids and the adults that served them. We cared that they were literate. We cared that they were prepared to enter into the world. We were absolutely dedicated to their success, and would do whatever it took to ensure they had what they needed in order to win. My work at a shopper marketing agency didn’t need me to fight as hard. We were selling chocolate, toys, and toilet tissue. It just wasn’t that deep.

Regardless of the nature of the work, though, I’m still me. I’m still a problem-solver, opinionated,  and strong-willed. I still have thoughts on strategy, ideas on how to do things better, and personal and professional experiences that are helpful when it comes to creating and implementing processes. It doesn’t matter where I go, what company or organization, I’m always going to be a leader with an entrepreneurial spirit. Whether I’m bagging groceries or managing 100 different employees, that’s just me.

In fact, both of my previous jobs recognized that and created brand new positions for me. They tried to make it work, and I tried to make it work, and I don’t have bad feelings at all for either companies. Actually, I probably owe them both an apology. I was a square peg trying to fit into their round hole. Instead of going and starting my own thing where I could run things the way that I wanted them to be run, I stayed and tried to make them adapt. Every company gets to the point where they just need employees. They don’t need another opinion, they don’t need another idea, they just need folks to sit down and cross tasks off of a list. Someone at my last job said to me, “Well, if you don’t like it, you can leave.” She wasn’t wrong.

Here’s the thing to remember. Some folks get so upset when a company doesn’t give them everything that they need. Well, as long as they’re giving you a paycheck every couple of weeks, their objective shouldn’t be to fulfill all your dreams. Of course, most companies will do what they can to give you a pleasant work environment, and some companies will even stock their kitchen with your favorite soda and snacks. The company’s goal, though? Revenue, clients served, sales, whatever. And if you work for a company, that should be your goal, too. Or you leave.

So, what’s next for me? Well, I’m busier than ever. The blog is rockin’ and rollin’. I put my hat in the ring for some interesting stuff, a few friends are keeping their eyes open for opportunities for me, and I’m doing some coaching and strategy work for other entrepreneurs / bloggers. The last week has been CRAZY, and I definitely wouldn’t have been able to work towards my goals and help someone else’s company reach theirs.

Quitting is working out for me so far. I’m my own boss. I’m nervous, of course, because, my family needs my salary. The good thing with this job is that I can promote myself, give out raises, and I’m in charge of how far up I can go in the company. I guess I’d better get to work, huh?

Thanks so much, Jenn! I'll see you there!

I needed to read this ... I want to make the leap but I need to position myself a bit, at this time I need to make sure I have a definite stream of income in and to pay down my debt but I'm so proud of you! You inspire us all to take a leap into the unknown to reach our goals! Thank you for sharing!

Thank you for sharing this. A friend posted it and it became a great encouragement to me. This particularly, "Every company gets to the point where they just need employees. They don’t need another opinion, they don’t need another idea, they just need folks to sit down and cross tasks off of a list." I wasn't that person. I am a big picture thinker and problem solver and I couldn't do just the task anymore. I was also trying to get this company to fulfill all my dreams. It just wasn't going to get me time with my daughter or flexibility for travel for caring for my aging parents. So, I quit and am starting my own business at home. Time to get to work!

Yay, Sarah! Way to go! It's hard, and I know it's not ideal, but…you deserve more. Your daughter is watching you. Your time with your parents is important. You can do this!!!

Congrats to you in this wonderful, yet sometimes scary, time! Because of the awesome and fabulous person I know you to be, you WILL be carried into wonderful endeavors that will do much more than sustain you but also satisfy you greatly! I wish you much success in this chapter of your life!! *hugs*

Brandi, I would love to have a chat with you off here. I know the feeling of when it comes time to leave. And I too also came from a nonprofit background. Let me know when you have time.