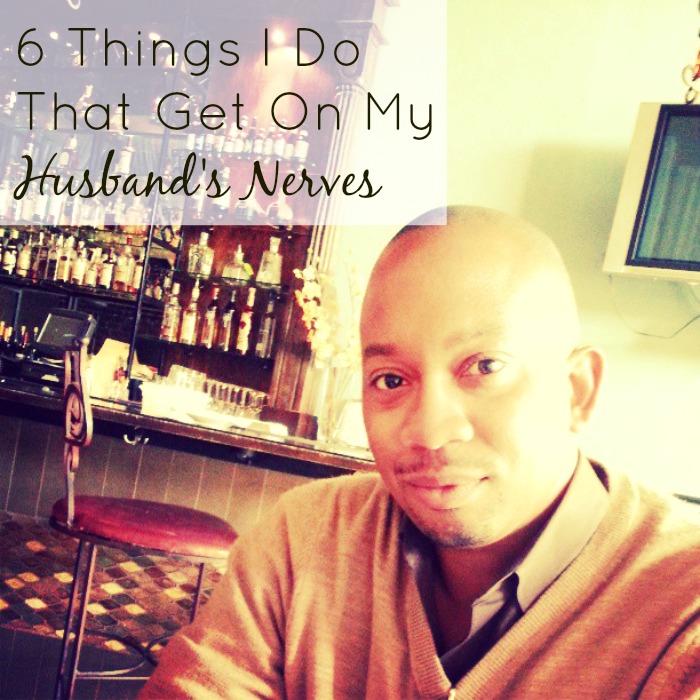 Well, folks. The honeymoon is over. Terrence and I have been married almost a year and a half, and it’s all binge watching Netflix shows and negotiating who’s going to be the one to wash the dishes tonight now. Even though we’ve settled into a routine, we do still get along really well. Our personalities just mesh, and we genuinely enjoy each other’s company. Except, well, there’s a few things. I’m not going to talk about how loud he crunches his chips, or the fact that he sets his alarm way too early, hits the snooze, but it’s too late because now your girl is up. Nope. Not going to talk about that. I will, however, share things that I do that he says get on his nerves. Wives, I need your help with this one. I don’t think any of this is particularly annoying, and I need to know someone is on my side.

1. Waiting 30 seconds before his show starts to share a new business idea.

Look, I’m an entrepreneur and he knew that before we got married. When the inspiration hits, I need to ride that wave. It just so happens that a lot of the time my creative juices start flowing at  7:59 PM PST. He should feel proud that I value his input enough to want to share with him. That’s what I think anyway.

2. Carrying open containers in the car.

There’s something about coffee out of a ceramic mug, or water out of a glass that just makes my drink taste so much better. Sure, I could put the coffee in a traveling mug, but then I won’t get that full-bodied flavor that I love. For some reason, however, my lack of closed containers drives my man nuts. I really don’t understand it. I’ve only spilled coffee in the car once in the last 2 years. What’s the big deal? Am I right?

3. Putting books and other objects in front of the remote sensor.

First of all, let me just say, I still don’t really get how to use our remote control. Oh, we don’t use the perfectly fine one that the cable company gave us. Nope. We use an extra special one that takes a Ph.D in Remote Contrology to be able to understand how to use. Anyway, Terrence doesn’t like that I put things in front of the remote sensor. Sometimes it’s books, this Christmas it was a sequined reindeer. He said that our remote is way better than a standard remote. Well, if it can’t change the channel through a stack of books, it must not be that fancy, huh? Shoot.

4. Googling the end of a movie that we’re watching before it’s over.

When we start watching a movie, I’m usually fine. There comes a point, though, when the anxiety takes over, and I have to know how it ends. I’m like that when I read books. I can get to page 113 or so before I have to jump ahead to make sure my favorite character isn’t going to die. Once, Terrence had to wrestle the phone from my hand and toss it across the room so I couldn’t get to Wikipedia to find out what happened at the end of “Divergent”. Toughest 27 minutes I’ve had in a long time.

5. Insisting on a certain movie then falling asleep 5 minutes into it.

Terrence is pretty flexible when it comes to movies. I’m not. I don’t do scary, super sad, or too action-packed. I can’t stand movies that are too loud, and I don’t like movies where people are too soft-spoken. Wow. Now that I see that in black and white, I’m pretty much a nightmare to watch movies with. In any event, I have a strong opinion on what movies I want to see, and I’m adamant about watching only films that fit my criteria. But then, most of the time, I fall asleep on them about 5-10 minutes after they start. Hmm…on second thought, he might have a right to get annoyed with that one. Moving on…

Ladies, now I know y’all have to feel me on this one. You want to go out to eat, and really, you are willing to compromise and eat anywhere. Unfortunately, the suggestions your husband gives are not on your “anywhere” list. I mean, when I say anywhere, what I really mean is “mostly anywhere”. Look, when a sista is hungry, you can’t expect her to make sense! It’s just not fair.

Alright, Ladies. Tell me you feel where I’m coming from, and that none of these things are really that annoying. On second thought, don’t lie to me. Ha! Just share something you do that gets on your husband’s nerves so that I can know I’m not alone!