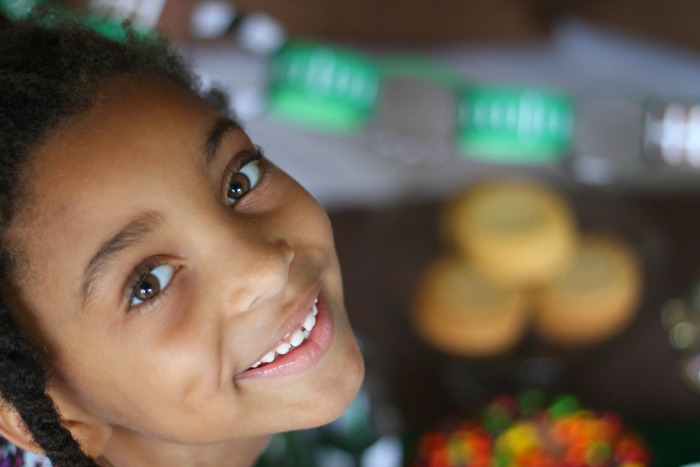 There’s a reason we don’t keep a lot of treats in our house. Terrence, Ayva and I LOVE candy. Terrence isn’t that big on chocolate, but he loves those sour gummy worms that are covered in sugar. I’m not a fan of those, but I’ll eat just about everything else, and so will Ayva. It’s no surprise, then, that when work dictates that I must use several bags of miniature Snickers for a blog post, that several bags of miniature Snickers would get eaten. Ayva and I have been doing pretty good with eating them with some sense of self control, and we still have quite a few left.

Earlier today, Ayva went into the kitchen and ate a Snickers without asking. That’s a no-no in our house. I’m not some evil food dictator. Ayva can get as much water as she wants anytime she wants it, and if she actually ate fruits and vegetables without being told, she could have plenty of those as well. Because she’s not exactly over the moon excited about eating foods that are good for her, but will KILL a bag of chips or cookies, it’s important that I know what she’s eating and when. Also? She’s 5, so I don’t really expect her to make the best choices. Anyway, when I asked her if she was eating candy, she said that she was, and I told her not to eat anymore without asking.

About 20 minutes later, guess what my little angel did? Yup. She went in and got another mini Snickers. When I asked her about it, she confessed right away even saying, “I’ll go get in time out”. I didn’t think that was enough punishment, because it almost felt as if she’d weighed the consequence and thought it was worth it. I made her write an apology note for sneaking around (on her own without asking me how to spell things), and Terrence suggested I take her stuffed animals off of her bed for the night. I did give her that time out that she was expecting, too, and she was so bored she fell asleep.

Even though it stinks that my baby was caught sneaking around, thanks to some insight from a couple of other moms, I was able to gain a new perspective. First, Ayva was honest both times about the candy. She was wrong, oh, she was REALLY wrong for getting the candy, especially the second time, but she didn’t lie. The second thing is, if I have a hard time as a woman in her mid-thirties not eating the candy when it’s sitting out, I’m sure it’s tough to practice self-control when you’re a 5-year-old with a sweet tooth.

When I’m in the middle of parenting, I forget sometimes to stop and handle each moment with the appropriate reaction. It’s easy to get caught up in fussing and punitive punishments, and the real lesson that can be learned, by both of us, gets lost. I want the best for Ayva, you know? I want her to be obedient, and to grow up to be honest and trustworthy. Taking the extra time to think things through before I react and punish will give me more opportunities to really help her to develop those characteristics. She’s already shown me that she at least knows how to tell the truth, and I’m actually kind of proud of her tonight. And myself.

Oh, and we’re definitely getting those Snickers out of here. Well, maybe after I have just one more.