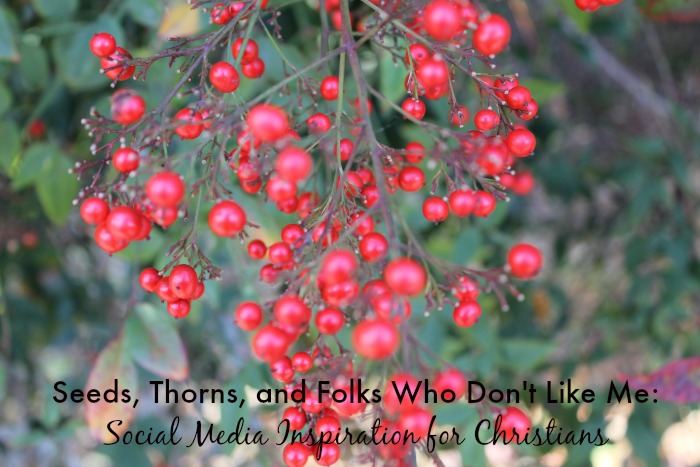 Over the last month, a former social media “friend” has been going to different people that I know and telling them what a terrible person I am. She’s been warning them to stay away from me, and speaking bad about Pushing Lovely, the authentic writer support group of which I am a co-founder. I don’t know her well enough to care about what she’s saying. She and I had an interaction that didn’t feel positive to me, so I released her from our online “friendship”. See, although I have had the good fortune of building real and lasting relationships on the internet, I still recognize the fact that…it’s Facebook. Or Twitter. Or Instagram. Unless we’ve taken the time to really talk and build and get to know each other, we don’t owe each other anything except for the standard respect that all living creatures should receive from each other.

Read: Just Because I Like You Doesn’t Mean That We’re Friends

While the woman’s words don’t have much bearing on my life, earlier this week, I did find myself wanting to prove to my real friends that what she said wasn’t true. I didn’t do it by bashing her, because there was no need. Although we didn’t agree, our final exchange wasn’t nasty or terribly negative. We just didn’t mesh. It happens. We don’t all have to like each other. I did, however, feel concerned that the people who were being approached about me by her would believe her truths (Not lies. If she truly feels that I’m a bad person, an egomaniac, etc. that is her truth, and she’s allowed to have that.) and feel that I had let them down. Several of my friends, sensing my concern, reached out to me and reminded me that God has work for me to do, and that I need to stay on that path, not letting folks in this world get me off track.

Terrence and I are leading children’s church today, and as I was reading through our lesson this morning, something clicked for me. We’re going to be teaching from Luke 8:4 – 15. In those verses, Jesus shares the parable of seeds and soil with his disciples.

4 While a large crowd was gathering and people were coming to Jesus from town after town, he told this parable: 5 “A farmer went out to sow his seed. As he was scattering the seed, some fell along the path; it was trampled on, and the birds ate it up. 6 Some fell on rocky ground, and when it came up, the plants withered because they had no moisture. 7 Other seed fell among thorns, which grew up with it and choked the plants. 8 Still other seed fell on good soil. It came up and yielded a crop, a hundred times more than was sown.”

When he said this, he called out, “Whoever has ears to hear, let them hear.”

9 His disciples asked him what this parable meant. 10 He said, “The knowledge of the secrets of the kingdom of God has been given to you, but to others I speak in parables, so that,

“‘though seeing, they may not see;
though hearing, they may not understand.’[a]
11 “This is the meaning of the parable: The seed is the word of God. 12 Those along the path are the ones who hear, and then the devil comes and takes away the word from their hearts, so that they may not believe and be saved. 13 Those on the rocky ground are the ones who receive the word with joy when they hear it, but they have no root. They believe for a while, but in the time of testing they fall away. 14 The seed that fell among thorns stands for those who hear, but as they go on their way they are choked by life’s worries, riches and pleasures, and they do not mature. 15 But the seed on good soil stands for those with a noble and good heart, who hear the word, retain it, and by persevering produce a crop.

My job in this life is not to go around trying to clear up my good name to those who may believe the things that this woman is saying about me. What I need to be doing is acting on the things that I’m learning in the Word of God. I have to keep bettering myself, being more honest, more humble, and stepping outside of myself to be more helpful to other. I want to be the good soil, not covered in thorns. I don’t have to worry about clearing my name, because the crop that folks see, it speaks for itself.

The most important thing for me to remember is what God has shown me over and over again, in His Word, and through the way that life has happened for me. I’m not here to be a big superstar. My purpose in life is not to be in the spotlight, or to be glorified. I am not God. My purpose is to do His work here on earth. To be a great friend, and a wonderful mother. To be a rib to my husband, and a beacon shining light on God’s grace and goodness, and sweet gift of salvation.

There may be naysayers. There always are. There might be folks that don’t like me. (Hey, even I can admit I can be difficult to “get” sometimes), but three things will remain the same:

1. Seeds will grow in good soil.

2. The crops are there for those who want some.

Everyone has their truth and it doesn't mean its your truth. We are all responsible for building the foundation that people that know us will rely on when it comes to knowing who we are with them and for them. We cannot and will not make everyone happy or a friend. That is the good thing about God he has made us so resilient that we are able to bounce back and have those that belong in our circle to help "pump" us up!

I wrote this awesome comment from my phone but it didn't go through. I'm pressed for time now, but the gist of it was, you are awesome, you are loved, and people are crazy if they don't see your beautiful gifts.

See, I'm taking a different approach to this. I want names because my can of whoop a$$ is already open after reading this. This person obviously has horrible self-esteem issues and just needs a good old-fashioned attitude adjustment. I guess your approach is much healthier, but haters for no apparent reason infuriate me.

I can't imagine that anyone would have a reason to speak badly of you. There will always be haters out there, I know I have my fair share, and it can get really hard to brush it off when it comes down to it. You are amazing, and no amount of bashing who you are will change the light that shines through you :)

Thanks so much, Jess. Yes, there will always be haters. Let's just make a pact to keep in moving despite their efforts to slow us down!

Indeed they do. Thank you, @malleryschuplin:disqus! :-)