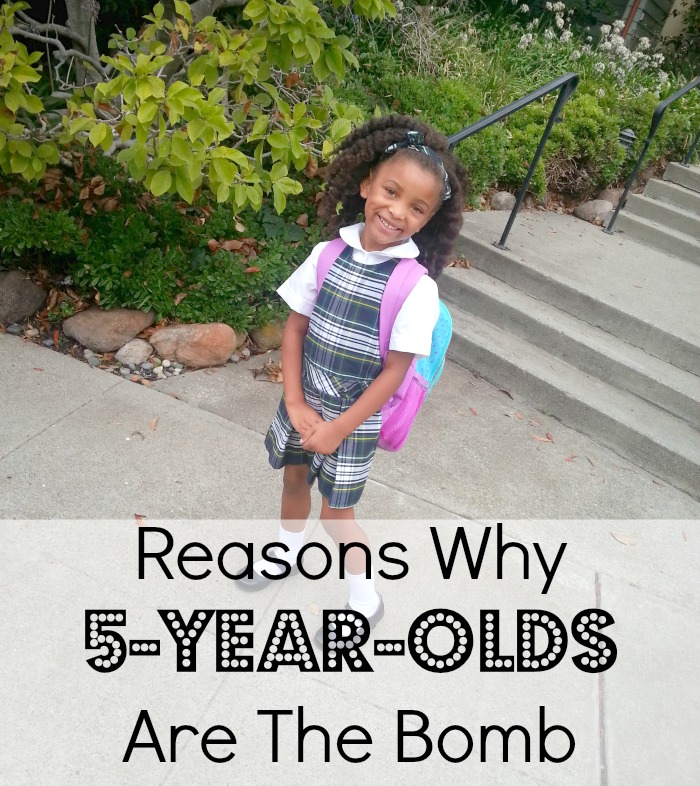 You know, when Ayva was born way back in 2009, I would have never imagined that I could love her more than I did that first day I laid eyes on her. Well, I’ve been proven wrong over and over again, with my adoration for her growing exponentially every single year since. There’s something different about 5, though. Parents of current or former 5-year-olds, I’m sure you know what I mean. It’s not just about the cute quotient when they’re 5. At this point, their personality is really shaping up, and they’re these awesome little humans that you sometimes stare at in total disbelief that this wacky, creative, dramatic, intelligent, uber adorable being was birthed by you.

That’s not just me, right?

No. I know you do it, too, the staring in disbelief. I’ve caught some of you in the act. And I’ve been around other 5 year olds. They’re pretty fantastic. dNeed a laugh? Put a group of 5-year-olds in a room together and watch hilarity ensue. Seriously. Try it. If you’re not convinced, check out this list of reasons that these kids are the bomb. If you’re still not sold, I’d encourage you to check your pulse because everyone alive knows that 5-year-olds ROCK!

Ayva learned how to shimmy in dance camp this summer. I don’t think I’ve seen anything more amazing in my life. I nearly collapsed from laughing so hard the first time she did it for me. It was awesome, and I’ve asked her to shimmy at least 3 times every day since then. She cheerfully obliges each and every time. No one, and I mean NO ONE, dances better than a 5-year-old.

The level of intelligence

You haven’t learned anything until you’ve had a 5-year-old explain something to you. The other day, Ayva observed some older students participating in a CPR and First Aid workshop at her school. From her descriptions of the dummies (“they’re like people, but just the middle part”) to the poignant explanation of the purpose of the training (“It’s about learning to be brave”) 5-year-olds often have wisdom beyond their years.

The sense of responsibility

5-year-olds take their responsibilities seriously. If it’s their job to hand out the silverware at dinner, no one else better not try to hand out the silverware at dinner! This summer, I taught Ayva how to use my Keurig, and HONEY, this child made my coffee religiously, and perfectly, every single day. If I tried to do it, she’s get upset because it was HER JOB. I finally realized that she liked to do it, so I relaxed and let her do her magic. How does the quote go? “Give a child a fish, and they’ll eat for a day, teach them to make coffee, and they’ll do it for you all summer long.”  Or something like that.

Oh my gosh. When Ayva laughs that loud, outrageous, totally uninhibited laugh, it makes my entire world happy. I pretty much know what will crack her up, so I can hear it whenever I want.  It’s those  fits of laughter that come from something silly and unexpected, though, that completely melt my heart. Oh, and a couple of 5-year-olds having a giggle fest during a playdate? Total Mommy kryptonite. You’ll be all, “Who wants ice cream? Who wants cookies? Who wants all the candy? Just keep laughing!”

Oh, baby snuggles are so good. Actually, baby snuggles are like, the best thing ever. Five year old snuggles, though, oh they’re up there. Now, in addition to the gooey kiddy hugs, your 5-year-old will give the sweet “I love you, Mommy” that absolutely makes life worth living. Also, they’re sitting still and not bouncing all over the place for a couple of minutes, which is a total win/win!

Ayva went to swim practice one day afraid to get her head wet. Two days later, she was jumping in and chasing her friends underwater. 5-year-olds don’t over think their ability to do things. Show them what to do, and they’re going to do it. Self doubt doesn’t exist for these kiddos. They’re brave, and I’m inspired by them.

Two 5-year-olds meet, the first thing they’re going to do is stand and look at each other, not talking, for about a minute. After that, they’re best friends. Ayva’s current bestie is a 1st grader that she met at extended care at school whose name she can’t remember. And they are totally BFF’s. If only it were that simple for us Moms!

Five year olds are funny even when they’re not to be funny. They can’t help it. The hilarity completely just oozes out of their little pores. Like the time Ayva performed an original opera for Terrence and I where she sang about a witch. Who had an itch. And a stitch. And a glitch. And a…take a wild guess. And guess which ONE word was the apparently the chorus to be sung at the top of her lungs over and over and over again?  Yeah. Hilarious. Ha!

I mean, come on, it’s almost not even fair for 5-year-olds to be so awesome. Especially when they can also be so, uh, disciplinarily challenged (totally just made that up). Whattaya going to do, though? At least they’re not teenagers. Am I right? Ha! Really, though, 5-year-olds are pretty much rocking life. I’m incredibly happy and totally blessed to be able to rock it with mine!

My daughter's 5th birthday is today - exciting to read about all the adventures we have ahead of us!

She is sooo cute and yeah they are pretty cool little people. Then they become 6 and they are grown littler women. You have been warned LOL

Oh my! Thanks for the warning, Girlfriend!