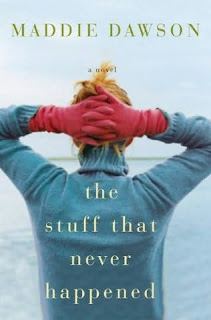 I don’t do a whole lot of reminiscing about things in the past. I really work hard to try to live life in the present…to be right here and focus on the people who are here right now. Life milestones, however, tend to make me reminisce on my life…birthdays, new jobs, Ayva’s birth, but recently, I was inspired by a book to remember a certain someone from my past. In “The Stuff That Never Happened” by Maddie Dawson, Annabelle is a woman who has been married for over 20 years to Grant. In the beginning of her marriage, she had an affair with Jeremiah, and when it was over, she and Grant vowed to never speak of it again…but she still thought about, fantasized about, Jeremiah. She runs into Jeremiah one day, and has to decide whether she is going to be where she is, or take her past into the future.

I’m not married, but I did had a Jeremiah. My Jeremiah was handsome and athletic, and always surprised me with how super-sweet and thoughtful he could be. It was a love relationship that started as a college crush and blossomed over years and miles apart. When we kissed 5 years after first meeting…I knew he was the one. Our relationship was…unconventional. We never really clarified what exactly we were doing, but one thing was clear. I loved him, and I thought…at least most of the time, that he loved me. What we had continued for years until one day, without warning, he broke my heart. Like Annabelle in the book, I had to pick up the pieces of my heart and try to move forward the best way I could.
At first, I used to think about him all of the time. Wondering what life have been like if I would have fought for him, if I would have packed my bags and caught a flight and made him leave the life that he had chosen. I wondered if I would ever feel for anyone else the way I felt for him, or if I would ever meet someone who could make me feel like a teenager with a crush every time we were together. He was my one! He was supposed to be THE one. But that never happened.
What did happen is the years since we broke things off is that I learned how to communicate my needs and wants better. I started paying more attention to my career and my art. I learned to expect as much love back as I gave out, if not more. I learned patience. I learned forgiveness, and I learned how to be where I was…to be there, and to appreciate it. I became a Mom. I became Ayva’s Mom. I became myself.
I don’t think much anymore about the stuff that never happened. Now, I’m more focused on the things that are happening…making sure to keep my eyes open, and my soul open so I don’t miss the good things that are right in front of me!
*I received a complimentary copy of the book, “The Stuff That Never Happened” as a member of the Left to Write Book Club. All comments and opinions of the book are my own, and I did not receive any compensation, monetarily, or otherwise, for this post.*
Previous Post: « LESSONS FOR MY CHARMING CHILD
Next Post: WHY I HAVE TO HEAL »