Before we begin, let’s just be clear—Mary Poppins Returns is not a remake. As much as we all love the original, don’t come to this film looking for the same songs and situations as the first Mary Poppins. This movie has a brand new story, music, and characters and it is breathtakingly brilliant.

The film opens up with Lin-Manuel Miranda as Jack the Lamplighter setting the scene with a beautiful ballad. Apparently there was some debate about whether or not this song should be at the top of the film, but I can tell you it’s just perfect. As we watch the Banks’ sleepy neighborhood wake up, my anticipation starts to build—Mary Poppins is coming!

Michael Banks and his sister Jane Banks are all grown up in Mary Poppins Returns, and the family is dealing with the aftermath of the recent death of Michael’s wife. Mr. Banks is an artist who works part-time as a banker to provide for his family which includes three children. Annabel, John, and Georgie Banks are precocious, darling, and mature in a caring way. They’re cared for by their father, aunt, and their housekeeper Ellen.

After a visit from debt collectors and an imminent foreclosure on their family home, it’s clear that the Banks family needs help. At that point, Mary Poppins does what she does best. She blows in and helps the family learn to navigate their new norm, find solutions to their problems, and remember the magic and wonder of just being alive.

The punctuation on the film was definitely the music. The song lyrics are smart and catchy, or thoughtful and sweet, and there were several points in the movie where I cried because the music was just so gorgeous. This is a film where you will definitely notice the score. I will go as far to say that the music plays almost a supporting character role in the way that it lends to the story and guides our emotional journey. 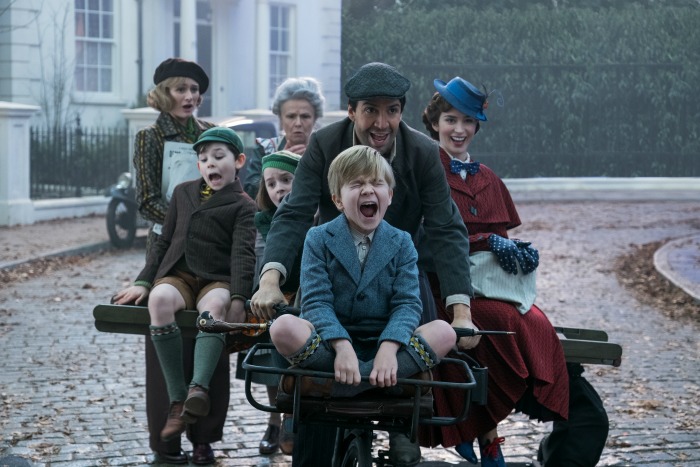 The characters are magical

The best part of Mary Poppins Returns is without a doubt the characters. While Emily Blunt as Mary Poppins is the star, this is truly and ensemble film. Lin-Manuel Miranda is light on his feet and truly embodies the character of Jack the Lamplighter. The children are charming and a delight to watch. Emily Mortimer and Ben Whishaw are simply lovely on screen. This core cast stands out from other family films where either kids or adults shine. In Mary Poppins Returns, everyone holds their own!

As if that wasn’t enough, the supporting characters are outstanding. Meryl Streep as Mary Poppins’ cousin was a treat that none of us deserve! She lit up the screen in what was easily my favorite scene. When Dick Van Dyke finally appeared in the movie, the entire theater gasped and applauded, both because of the role he played, and because it’s DICK VAN DYKE! Between Meryl Streep, Dick Van Dyke, and Colin Firth, plus the ensemble cast, this film is a masterpiece. 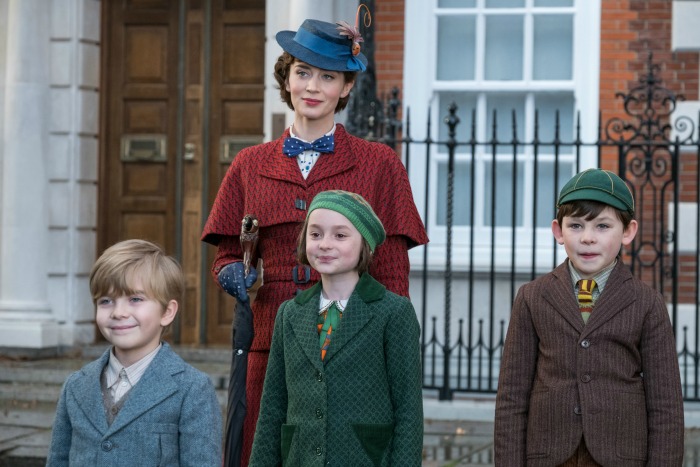 As you can imagine, Mary Poppins Returns is a fantastic film for kids and obviously age appropriate. The film is rated PG due to some mild thematic and brief action that might make some children a little nervous.

The movie showcases themes of grieving, adult stress and frustration, and there are two characters (one animated and one not) who are sneaky, greedy, and evil. Children who are emotionally sensitive will pick up on these things and may have questions, a lot of it will go over their heads.

I really appreciate that the most challenging scenes are followed by another situation that helps to lift the mood and maintain the Mary Poppins Returns magic. The scene that was most tough for me, when Mr. Banks raises his voice in frustration at the children, is followed by the most raucous and fun song of the film. Another incident ends with a sweet ballad that will melt your heart.

That being said, I appreciate a parent showing duality and humanness in a film. It’s rare to see multidimensional parenting these days on television and in film, so this really stood out to me about Mr. Banks’ character. After my daughter sees it, I plan to have a discussion with her about times that I’ve been having a rough time and how I might have raised my voice at times. I’ll make sure to remind her that I still love her in those moments, and let her know that, just like Mr. Banks, I’ve been working to really listen to her but I don’t always get it right.

As far as the brief action, that takes place during the animated scene, and might really be scary for some kids. The children are being chased by some sinister cartoon characters, and the musical score follows the action which heightens the intensity. It also occurs at night, so it’s dark which adds to the feeling of danger. The entire sequence lasts about 4 minutes, so if your little one is scared, they’d be okay closing their eyes and covering their ears.

Overall, this is a film for children of all ages. I plan on taking my toddler and my 9-year-old and feel confident that they will both love it just as much as I did.

Is Mary Poppins Returns as good as I thought it would be?

Mary Poppins Returns is not as good as I thought it would be. It’s even better that I could have imagined! Everything from the acting to the music to the story comes together to create a film that is an instant classic. I’ve seen it twice already and could see it twenty more times. I can’t wait until it comes out on Blu-Ray.

The timing of this film’s release is so perfect. We’re living in a time when everything is moving so fast which impacts the way we’re raising our children. It can feel frivolous to spend time imagining with our children, and to listen to their daydreams and stories. Mary Poppins Returns was a reminder for me to slow down and be mindful of the way that I talk to my kids, the importance of creating new experiences and memories with them, and even to remember their resilience and brilliance.

I am so glad that Mary Poppins Returns. We need her. From her spirit to her can-do attitude, all of us can learn something from Mary Poppins. We need to know that everything is possible, even the impossible.