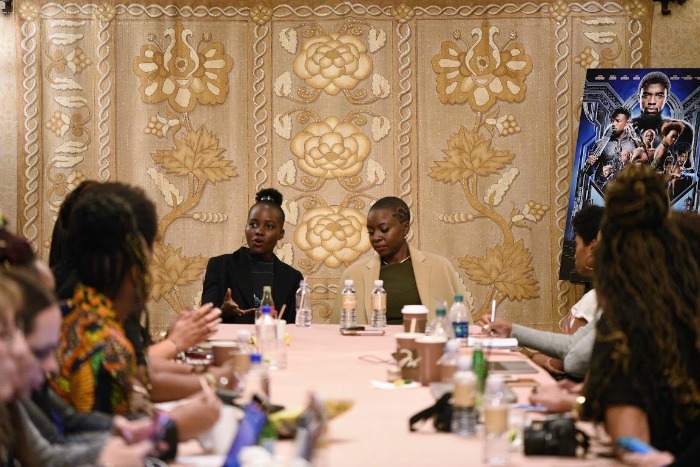 There’s nothing that makes me more excited to see a movie than knowing that it features well-rounded, three dimensional female characters. The leading women in Marvel’s much anticipated movie Black Panther are absolutely that and much more. Lupita Nyong’o as Nakia and Danai Gurira as Okoye are both mentally and physically strong. Apparently, that was by design. Ms. Nyong’o said about writer/director Ryan Coogler, “It was really important to Ryan to have women who are standing in their own in this movie.” And stand on their own they did.

My colleagues and I had the chance to sit down with the two stars and talk to them about the movie and the work that it took to bring these incredible characters to life. They were candid and inspiring in the interview. While they were breathtaking on screen, they were even more so in person. Much to our delight, the girl power that we saw on screen was just as prevalent in person. Ms. Nyong’o and Ms. Gurira are women’s women through and through.

Question: Can you talk about what it takes to bring these characters to life? I know it’s acting but it represents what we want to see in ourselves and see on screen. You two do it in a way that’s so authentic. What is your process in creating these characters?

Lupita Nyong’o: For both of us, especially when we’re dealing with African representation in story we feel such a strong sense of responsibility and desire, deep desire to see African women on screen that look and feel like we know them to be. And so with these characters we wanted them to be women that we know. The women that I know are complex and they’re deep and they’re about something other than just the man in their lives. I think that was really important to us to show women with agency and strength.

Strength does not mean an absence of vulnerability. It means that you have it in yourself to get yourself through things, to seek help. Strength in itself is a very complex idea. It was important to us that the women come across as being full. That’s not hard if you commit to expressing humanity and not. 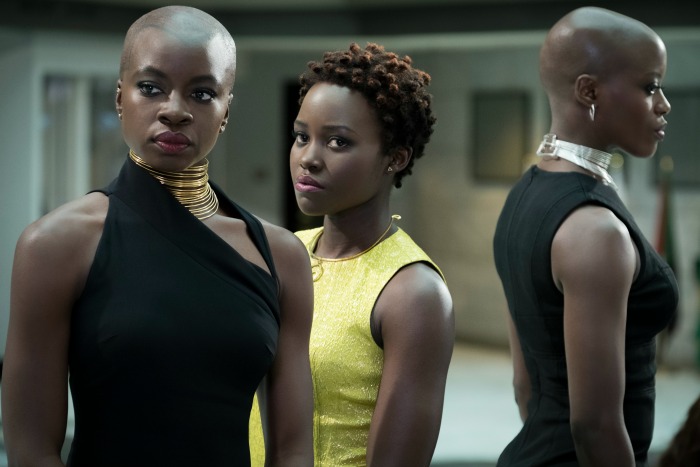 Question: In which ways do you identify with your characters that helped you develop them as the strong independent women they are?

Danai Gurira: I definitely related to her her power and purpose. Okoye was very purposed and I think she was purposed since she was quite small. When I decided what I wanted to do I was very clear about it. So I could really relate to that about her, about the way that she is so dedicated to her nation and so dedicated to her people and really holds responsibility.  I feel like she considers Wakanda this gem that she has been given to perfect and so she really takes that on as something that is priceless and that she cannot let slip. That’s really something that propelled me, connected me to her.

The other thing that really connected me to her was the stakes of losing Wakanda.  We’re both from the continent and the passionate — the passion I have for what I feel the continent could be is very strong in me. I write plays that feed into it.

Lupita Nyong’o: I identify with Nakia’s independent spirit and feeling her loyalty to her country. It means a lot to her to make her people proud and I understand that. I relate to that. That was my into figuring out who she was. I love a woman who is on a mission to make a difference which is what she’s on. 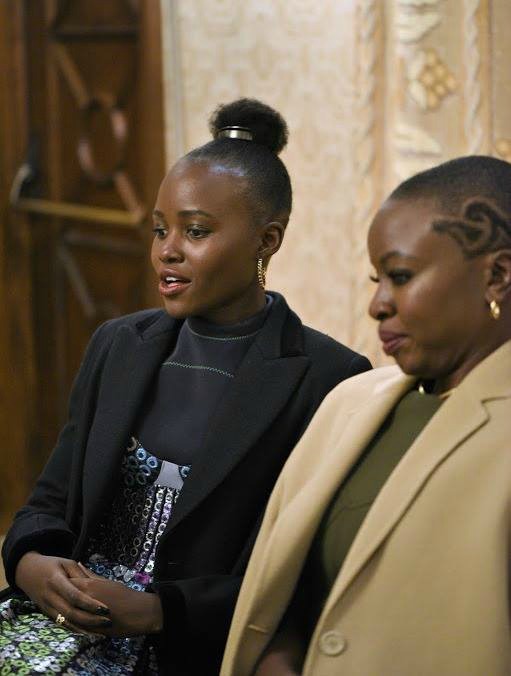 Question: What was your training process like for the fighting scenes? What did you go through and how did you challenge that and still look super graceful while you were doing it?

Danai Gurira: We trained a lot. These women are different and their fighting styles are very different. Mine is very traditional. Hers is get the job done. My character’s gonna pull out her spear, and she’s gonna do forms that have been in Wakanda tradition for generations. I just love that.

Lupita Nyong’o: The training was a big part of getting into character. Understanding how someone fights reveals a lot about what their values are and who they are. We occupy our own space and then going into battle together everyone has a different strength to bring to the table. It was a way to make fighting extremely rich and full of culture in and of itself. It’s very specific.

Question: Hair makes a huge statement in this film. Can you tell us a little bit more about that?

Danai Gurira: It’s such a celebration, and that’s what’s so powerful to me about it. You often don’t see Africanisms celebrated. I love what the hair department and the costume department did. They pulled from real actual cultures and ethnic differentiations and how hair is celebrated across the continent traditionally and currently. There is something really powerful about all the ways that hair was represented there. There are so many things that tell us of African descent that there’s one way that we should actually manifest ourselves in society in order to be accepted or acceptable.

Lupita Nyong’o: Sometimes there’s something that only sisters can do. We can do the most with our hair. We can go bald, too and it works. I think that is a celebration we’ve rarely seen exhibited in such splendor so that really excites me for people to see. 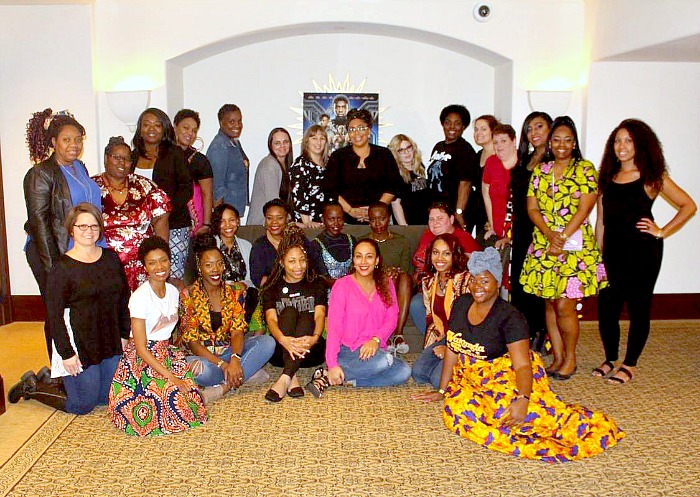 See Lupita Nyong’o as Nakia and Dania Gurira as Okoye when Black Panther opens in theaters on February 16th.