You are here: Home / moms / motherhood / Just One Penny
0 shares 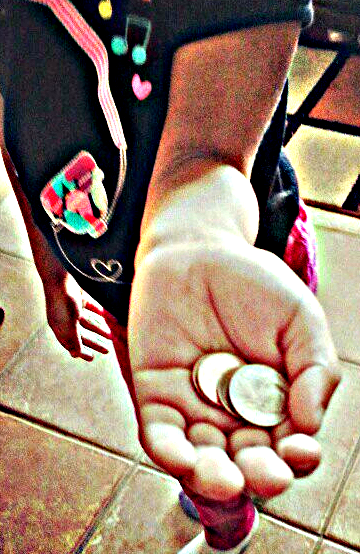 My Ayva has been blessed with the gift of finding money wherever she goes. It’s mostly pennies, but every occasionally she’ll discover a dime, or even a quarter. She gets so excited whenever she finds a coin, and it doesn’t even matter what denomination it is. She seriously acts like she’s just found a sack filled with a million dollars every time. I was thinking about that today when I walked past a penny on the ground. Even as I thought about how Ayva would have picked it up, I didn’t stop. I’m not independently wealthy. I’m really in no position to walk past money. But I did, because to me, it was just a penny.

Isn’t it funny how we do that? We talk about our needs, fret over them, stress about them. Some of us even pray to God asking Him to fulfill our needs. But then, when the answer is right in front of us, we walk right past it. And why? Because it’s just a penny? Well, when you consider that one hundred pennies equal a dollar, and a thousand pennies equal ten dollars (and on and on), that one penny looks a lot like the starting line for something greater. We have to think bigger that what we see right in front of us right at the moment. We have to be willing to open ourselves up to the greater possibilities of that one penny.

We recently gave Ayva a piggy bank that is just for the money that she finds. Even before she had the piggy bank, though, she kept up with the coins by keeping them in a neat little pile on her dresser, adding to them as she found new ones.  She probably has about five dollars in there. Not bad for a four year old whose primary source of income is finding money on the street! There’s no way she could have amassed that many coins if she hadn’t stopped for that very first penny that very first time. Even as a preschooler, she had enough vision to know that regardless of the amount of value that something has, if it has any value at all, it’s worth picking up, and holding onto, and adding to it.

Okay, so I didn’t pick the penny up…that time. But I did learn a lesson. I’ve been struggling a bit with wanting to do more, wanting to help more people, wanting to make a bigger difference in the world. I have lots of chances every day, but many of them seem to be trite and just not enough. Well, nothing is ever just. It’s not just a penny. This is not just a blog. I am not just a Mom, or a Community Manager, or a bride-to-be. The possibility to be more, to grow into something bigger is always present. It’s up to me whether I’m going to choose to have vision and take advantage of the opportunities I get to matter more, or if I’m going to be narrow-minded and walk right past those chances like I walked past that penny.

Previous Post: « {Saturday Sights} Unexpected Zoo
Next Post: Sunshine and Rainbows (or, A Day in the Life of a 4-Year-Old) »