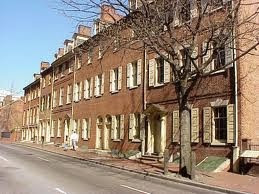 When I first looked at my current apartment a little over 2 years ago, I thought it was charming and cozy, and located in a beautiful neighborhood. Then I found out I was pregnant, and suddenly my cozy little apartment, perfect for a single woman, seemed like a dollhouse at the thought of adding a little baby and all of the accompanying baby stuff that comes along with them. Now that Ayva is a toddler, I am convinced that I live in a dollhouse, and I have been searching for a bigger home that will give us more space to love, laugh and play. The biggest challenge that I been facing is being able to find a home that is both affordable and in a good neighborhood. Our city is definitely a city of neighborhoods, and some of those neighborhoods are definitely better than others. I like where we live now, but prices have gone up tremendously over the last 2 years as people have discovered our quaint and friendly part of town.

A couple of months ago, we looked at a house that is right around the corner from where we currently live. It was beautiful! Three bedrooms, a finished basement, all appliance (including a washer and dryer), and an adorable little backyard. I wanted that house. When I called the owner to let him know that I was interested, he didn’t answer and I left a message. I never heard from him again. A few weeks later, Ayva and I were waiting for our bus to go to work, and the owner pulled up beside us. He said that he had tried to call me to let me know that he would love for us to have the house and that he had lowered the price but he had not heard back from me, so he gave the house to someone else. What! I didn’t get the call! He must have called the wrong number! WE WANTED THAT HOUSE! I let him know that I appreciated him thinking about us, and that maybe things would work out at another time.

Guess what? Another time is now! He called me on Monday to say that the folks that had moved in had to move suddenly because a change in the Husband’s job and they had to relocate immediately! He called me first and wanted to know if I was still interested! Yes! YES! YES!! We took another look at the house, and put down a small deposit. He’s calling to check my references, but I’m pretty sure we’re in! Oh, and the rent is lower than what it was when we initially looked at the house. And I passed by this morning, and the neighbors are elderly and normal and clean! Oh, and it is less than 1 minute from our current apartment!

Guys, I normally don’t share stuff that isn’t written in stone (or on a lease!), but I think you have to claim things. You have to trust God’s will and not be scared to speak things into existence out of fear of what people might say if His will is something different than what you want. It’s not about “jinxing” your “luck”, it’s about claiming your blessing. Please pray that Ayva and I get this home. I dream about decorating her room, and hosting her birthday party pajama jam in our living room. I can picture us sitting around the table doing crafts in the kitchen, and planting cucumbers in our garden in the back. I want this house. God, I want this house!