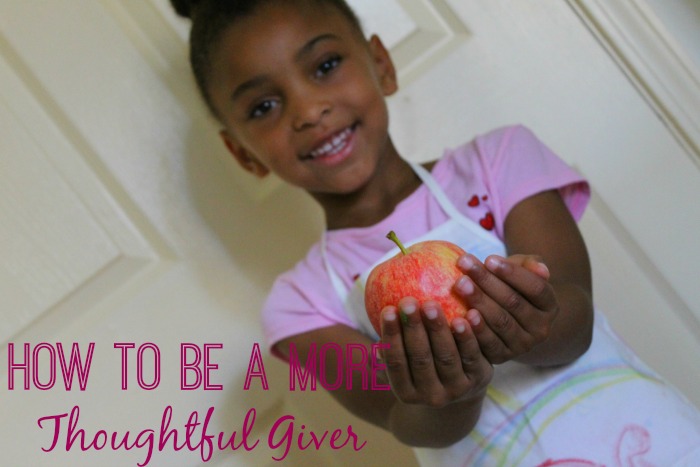 There’s a reason that I love the holiday season so much. It has nothing to do with the presents, or what I might receive from others, because I really don’t need anything. The main thing that makes me love this time of the year so much is that folks are so incredibly giving. From paying it forward in coffee shops and buying someone else’s drink, to spending time volunteering at food banks, or donating presents to families who need a little extra help, people just step up to support each other.

As we prepare for a season of really intentional giving, I have some tips that can help you to become a more thoughtful giver. These are lessons that I’ve learned over the years both from being a giver, as well as being in the position of receiving from some kindhearted people. Of course, these are just suggestions. Feel free to give as you can, in the way that makes the best sense for you and your family. Either way, I’m sure it’ll be appreciated, and it’ll definitely help add to the spirit of the holidays!

When you’re in a giving mood, it can be tempting to splurge on a bunch of  things for the person or organization you are donating to. Before you do that, though, make sure to ask what they need. In some cases, your well intentioned gift could end up being more of a hindrance than a help. For example, a microwave might seem like it would make meals easier for a transient family. If you ask them, though, they might let you know that they often move around on public transportation or taxis, so a small hot plate would be a better fit. Or a mom with 3 kids might already have someone who has offered to purchase shoes for the children, and what they really need are coats. Asking before you go out and buy could make your giving more impactful.

Have you ever heard the phrase, “Beggars can’t be choosy”? It kind of irks me. Just because someone is in need doesn’t mean that they can’t have opinions about their preferences. Of course, most folks in dire situations are going to just graciously take what they are given and be thankful. That’s even more reason to give good stuff, because the folks you’re giving to are likely to be the ones that are most appreciative. Not only that, but think about it. A poor kid runs down shoes just as easily as a child with means does. A pair of cheap sneakers are not going to do them any good. The same goes with toys, housewares, or really, anything that you decide to give. Certainly look for deals or specials, but don’t just give the dredges of the clearance bin just to say you gave.

3. Give because you want to.

The Bible says that God loves a cheerful giver. You are not obligated to give to anyone else if you don’t want to. In fact, if you are only giving out of obligation,don’t do it. If giving is going to put you in a tough situation and you’re feeling resentful about it, don’t do it. Being a more thoughtful giver isn’t just about the action of giving a gift, or doing a service, it’s about doing it because you care about someone else and you want to make life easier or better for them. People can feel your energy, and when you do for others with a spirit of love and grace, it makes the gift even more meaningful.

This is my favorite part of the season as well. I try to give all year long, but I always (intentionally or not) amp it up this time of year. I love your advice, and your heart!