You are here: Home / Uncategorized / “For The People” is the new court-based drama you need in your life
0 shares 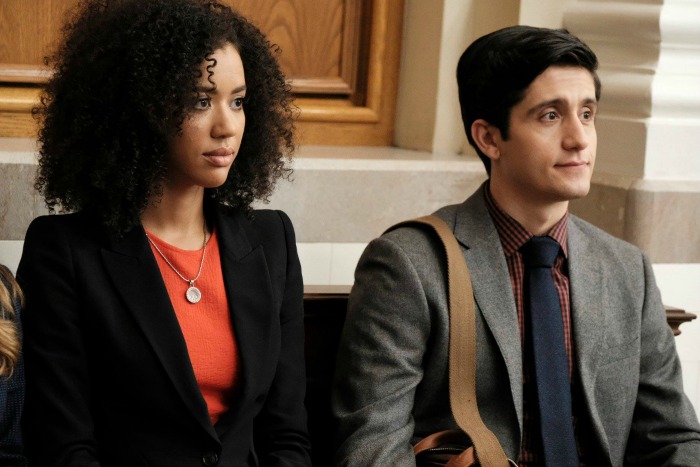 I’ve been watching court shows every since I can remember. The cool thing about them is that there are so many people, so many different issues and situations to touch on that they never seem to get old. The new show from Shondaland, For The People is sure to be a DVR definite for my husband and me.

Check out this interview with For The People creator Paul William Davies and some of the cast to get an idea of what to expect. For The People premieres tonight, Tuesday, March 13th at 10 PM EST on ABC. 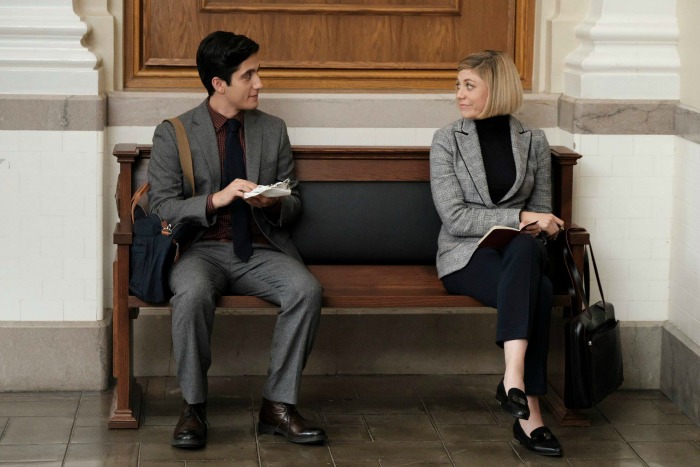 Where did the idea of For The People come from?

Paul William Davies: I had been kind of playing around with two ideas for a while. One of them was a a show set in the Southern District of New York the Mother Court, which in legal circles is the most prestigious trial court in the United States.

I thought a show set in that court with the kinds of cases that come out of that court and the lawyers that work in that court could be really interesting.  I also wanted to do something that showed the perspective of both sides.  And not like in a formulaic way but just kind of in a way that you got a richer sense of how the law works and how justice is made in America.

I thought having that dual perspective could be an interesting new way to approach a legal show.  I brought those ideas to Shonda (Rhimes) and we talked them through and ended up combining those two ideas into what has become this show.

What kind of experience do the cast and producers have in creating a show based on law?

Paul William Davies: I’ve been to the Mother Court.  I was a lawyer. I still am a lawyer. I still pay my bar dues but I’m hoping to never have to use them again. I was a practicing lawyer for years. I worked for a large law firm. I didn’t do the kind of noble work that these people do.  But I do have a background in the law and some of my friends that I went to law school with are actually consultants on the show.  I’ve been able to draw off both from my own experience and then people that I’ve worked with and went to law school with.

Weesam Keesh: I actually did shadow a public defender at the L.A. courthouse and that was an amazing experience. Just what the public defenders have to deal with within a few hours, from a bicycle theft case to a sexual assault case to somebody showing up for their prison sentence, to a juvenile trying to not get jail time.  They have to deal with a lot and it was very eye opening.

Jasmin Savoy Brown: I also have a public defender that I Skype with who’s in New York and that’s invaluable.

Regé- Jean Page:  I went to court in Compton, which is in experience.  I didn’t know before I started working on this that everyone has the right to go and just watch justice be done. You can turn up and watch a  case with very few exceptions which is incredible because it is so important for justice not just to be done but to be seen being done.

What do the actors think about playing lawyers?

Regé-Jean Page: Being in a courthouse environment and feeling people work at an incredibly high level, with people’s lives in their hands every single day is an extraordinary thing and something you kind of need to feel palpably before you can kind of take it on.  Just the fact they walk into this courtroom every day, real people’s lives incredibly intricate complicated stories.  And you have to boil that down and deliver it to jury with all the technicalities involved and essentially either save lives or not and with ten other cases on your back and five calls coming in every ten minutes.

Seeing people work in that kind of rhythm is both inspiring and a responsibility because you then have to represent that in its best light.  I noticed Paul confessing to being a lawyer over there, which I found very interesting. Maybe if we do this right we can go to in some ways kind of rehabilitating lawyers as people who run what is possibly the most important institution in this country, the justice system.  It should be something that’s on our side at all times, even though it doesn’t feel like it is. Hopefully people won’t have to confess to being lawyers.

How will For The People portray lawyers in a different light?

Paul William Davies: This was another thing that kind of went into the mix of thoughts that I had in creating the show is that- and studies have borne this out.  Really the only category of lawyers that are truly happy in their jobs are public defenders and prosecutors.  They tend to have the like by a wide margin highest career satisfaction among attorneys who generally have a very disturbingly low career satisfaction number.

Public defenders and prosecutors stand out because they actually are doing real things and are really invested and engaged in their jobs. I really wanted to show law in a light that was different than in some ways I experienced it and most of the people that I went to law school with experienced it, which was either the drudgery of a big firm or they stopped, they quit.  It’s generally an unhappy lot but this is the exception and this show is a little bit, more than a little bit, it’s aspirational that way.

For The People shows some intense issues. Does it ever get too intense?

Regé-Jean Page: I think Paul and his team have a gift for kind of making sure that they touch on the personal whilst you’re dealing with very large themes, and I think that very much comes through this.  Certainly one case that I dealt with where I kind of needed to detox my brain for a couple of days afterwards, because they threw me a real heavy curveball.  And that was again inspired, certainly drew some very close parallels to some real events.  You’re reminded that whilst we often keep it on a light tone, these are incredibly important things that we deal with.

Sometimes the world is a little bit dark and you need protection from that and you need people to kind of be torch bearers in that world on both sides, in the prosecution and the defense.  There are times when the weight of the thing can get very intense, but I also think that’s one of the gifts that this team has is in managing that tone and presenting the real world in its lightness and its darkness as a complete package that you can digest and take on and grow from.

Jasmin Savoy Brown: I found it really cathartic to be working on something that feels that it speaks to the times that we’re actually living in.  I think a lot of people are walking around with a lot to say about a whole host of worthy issues and it feels like, it feels really timely to be in a conversation that feels like it matters.

For the People premieres on ABC on March 13! 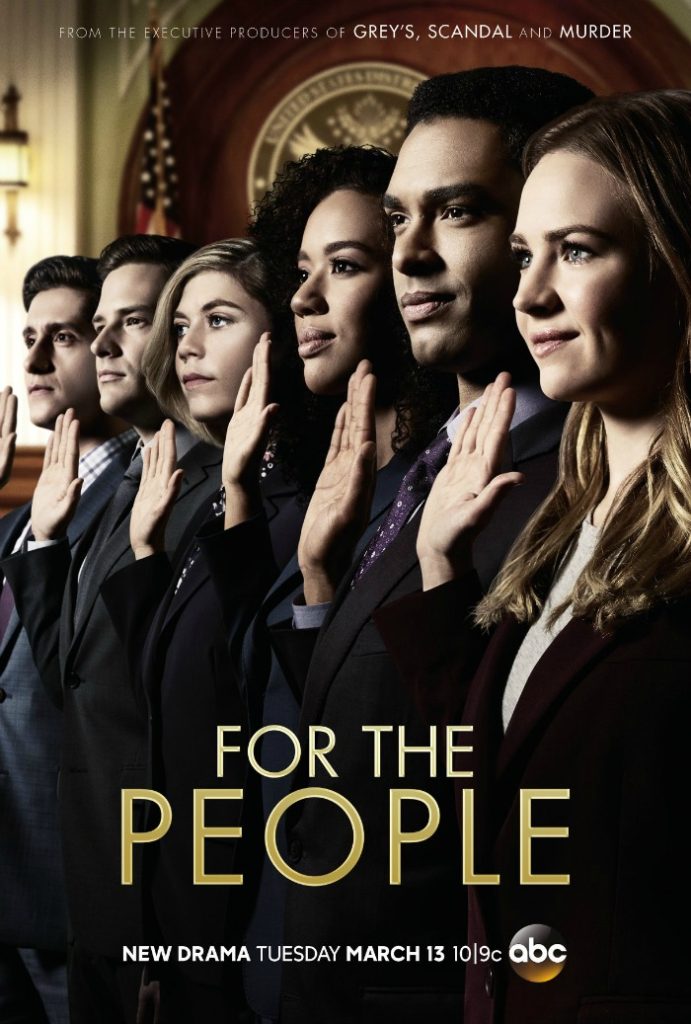 For The People, the new drama from Shonda Rhimes, premieres on March 13 at 10 PM EST.

More about For The People from the studio:

Set in the United States District Court for the Southern District of New York (a.k.a. “The Mother Court”), the new Shondaland series show follows six talented young lawyers working on opposite sides of the law and handling the most high-profile and high-stakes federal cases in the country.

These young lawyers will be put to the test both personally and professionally as their lives intersect in and out of America’s most prestigious trial court.

The series from ABC Studios is created by Shondaland’s Paul William Davies, who executive produces alongside Shonda Rhimes, Betsy Beers and Tom Verica.

Previous Post: « ‘I deserve to be here’: Teenage wisdom from A Wrinkle In Time’s Rowan Blanchard
Next Post: I love to celebrate my baby’s messy milestones »