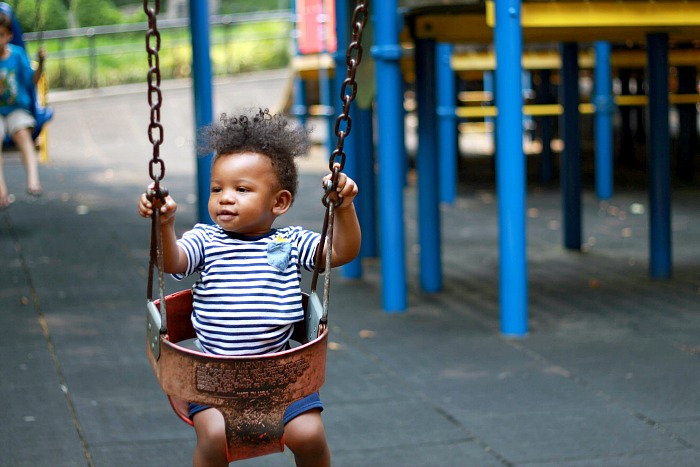 When I was a mom of one, I was so extra when it came to doing things for my daughter. She had three birthday cakes for her first birthday. I took her to the zoo or museums every weekend before she could even walk. Even though I was a single mom and my money was already stretched, I signed her up for gymnastics and other classes here and there. Whenever I went to the store I always bought her something. Every single time. She was my baby girl, and there was nothing that I wouldn’t do to make sure she was happy and well taken care of.

Now that I have another child, my life is different. Between my 4th grader, husband, work, and business, I spend plenty of time with the baby as a work at home mom. Somehow, though, I don’t seem to have the same amount of free time that I had when my daughter was little. My son is happy and healthy, but he could probably stand to get out more.

Of course, since I’m a mom who loves her baby, I started to feel a little guilt about that. Wait, who am I lying to? I was feeling a lot of guilt about it. My poor baby hasn’t taken any tumbling classes, yet. We haven’t done any Mommy & Me activities. We went to storytime at the library once, but there were a few too many babies there for my liking, so we never went back. Am I bad mom because my toddler’s social calendar is empty?

Is my baby bored?

A few weeks ago I was feeling particularly guilt-ridden. The baby was down for a nice, long nap, and at first I was grateful to be able to get some things done. Then I started wondering if he was sleeping so long because he’s bored. He does a lot of playing and toddlering around all day, but nothing formal. I don’t have any sort of curriculum to follow or special activities planned every day. That’s why he was napping, right? Because he felt so neglected that it was the only thing left for him to do.

As soon as he woke up, I gave him lunch and decided that I was going to do something to make up the months of boredom to him. I drove out to a playground that we had never been to before. We had a little over an hour before I had to pick my daughter up from school, so I figured I’d let him play for a little bit, then take him to pick up a new toy or game or book or something.

When we got out of the car at the playground, he got the biggest smile on his face. He pointed at the slide and said, “Wheee!!!” and ran over to it. Over and over again he climbed up the steps and slid down the slide into my arms. I pointed out the swings to him, and walked him over. Once he was in the swing and I started to push him, he just giggled his little head off. From there he went to a little spinning cup, then it was back to the slide to start all over again.

Time went by so fast. I thought we would leave after 15 or 20 minutes or so. I pulled out my phone to take some pictures and saw that we had been there for almost an hour. Jamie was having so much fun, and I was having such a good time watching him, that I lost track of time. I gave him another few minutes and then dragged him, in tears, from the playground and back into the car.

He was fine once I started driving, but he kept saying, “Slide. Wheee! Outside.” When Ayva got in the car, those are the first things he said to her, too. And when my husband came home, Jamie still remembered our little afternoon at the park.

At some point in life, we got to the place where parenting became a competition. We try to outdo each other with what we are able to do for our kids. That’s how so many places get to get away with charging ridiculous prices for a half hour class for toddlers. They know we’ll pay it because we feel so guilty about working, or ordering out dinner, or whatever. I mean, I am with my son every single day. He sits right next to me while I work, and I was still feeling bad! That doesn’t make any sense.

You know, I know that kids don’t actually require a lot to be happy, but sometimes I need a reminder. I think we all do. Parents put so much pressure on ourselves to be super exciting, and make every moment magical. Sometimes we forget that it’s the simple things that make our kids happy. We don’t have to spend a lot of money, or even a lot of time, to find something that will delight our little ones. Ice cream after dinner. Baking a cake (even if it’s from a box). Playing a board game together. Going to the playground. It really is the little things.

I’m so glad for the decision to head over to the playground that afternoon. It was just what I needed to remind me that I’m doing a bang up job as a mom. Instead of stressing over what I can’t do, I’m going to do more of what I can.