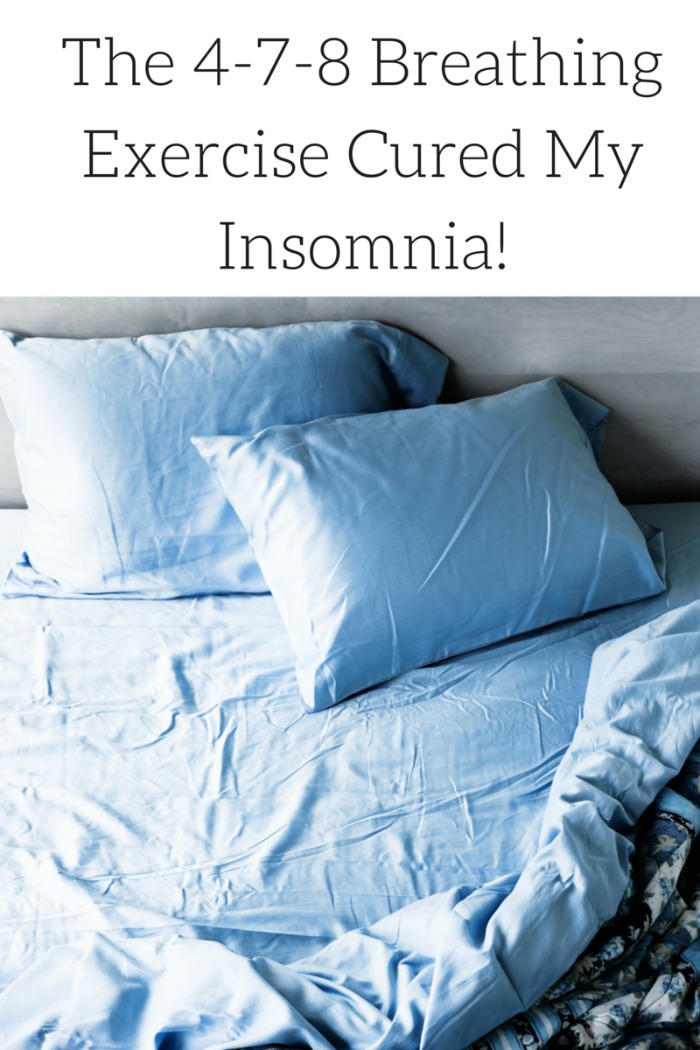 I’ve had insomnia since I was in college. Over the years I’ve gone to doctors, taken medications, eliminated caffeine, drank warm milk, exercised, slept in a cool room, and tried every other trick in the book for getting to sleep.

They just didn’t seem to work, so I’ve gotten used to just existing on an average of about 3 hours of sleep each night.

Except that lack of sleep has affected my energy level, my concentration, and just made me kind of like a ghost. I was looking for yet another trick to try when I stumbled across the 4-7-8 Breathing Exercise in my Facebook stream. And, y’all? I think my insomnia is cured!

Now, keep in mind that I’m a professional sleep counselor or anything. I’m so excited and RESTED that I had to share this with you all, though. Okay, so here’s how it works. It’s really simple.

How to do the 4-7-8 Breathing Exercise

-Hold your breath for 7 counts.

From what I read, what this series of breathing does is act as a natural tranquilizer.

As a former actor, I used to do breathing exercises a lot during warmups for shows or in class. I’m pretty aware of my breathing, and know that I’m often not taking in full breathes, but rather doing a lot of shallow breathing.

In a nutshell, there just isn’t enough oxygen circulating through my body. I have no idea what that has to do with sleeping, but, honey, that inhale, hold, exhale thing worked!

I don’t remember exactly when I fell asleep after doing the 4-7-8 breathing exercise. All I remember is waking up in the morning when Terrence’s alarm went off!

It was a sound slumber, too. Who would have thought that a little breathing would be the key to better sleep?

Great article! Just wanted to five my insomnia-busting tips! 1 - Meditate - as much or as little as you have time for. It helps me too calm my mind before sleeping. 2 - Yoga & Cardio Exercise - I can't sleep without raising my heart rate for at least 30 mins per day. 3 - Avoid Social Media - You know it's true...haha! Living your life waiting for "likes" is the best way to increase stress and affect your sleep!!! Hope this helps some of your readers. Keep up the great work!

The campaign to all exercise.

What will you do now that you sleep at night like normal people? While I will miss my favorite night owl vampire, I amglad you willbe able to get rest.

I'm going to try this...I am a horrible sleeper! (Although my new blackout liners are amazing!)

Oh, please let me know how it works for you, Amy! I feel like I can do anything---drink coffee at 9 PM, go running, watch a scary movie..and still be able to sleep! Probably not, but darn the breathing technique works!