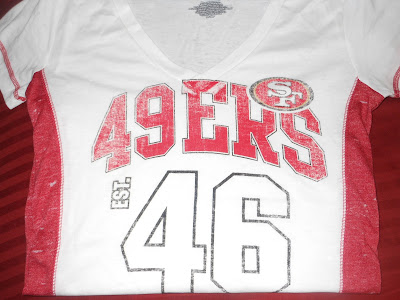 When I moved to California from Philadelphia a few weeks ago, my boyfriend greeted me with a lovely welcoming gift…a San Francisco 49ers tee. The line was drawn, and it became official…I’m now a 49ers fan. Coming from the city that famously boo’ed Santa Claus at an Eagles game, there’s no way I could have lived in the City of Brotherly Love if I didn’t eat, sleep and bleed green. Rooting for the Eagles was just as much a requirement of living in Philadelphia as eating cheesesteaks and running up the steps of the Art Museum like Rocky. Moving to California during football season, though, I discovered something about myself. I am easily swayed, and I’m not especially loyal.
Football season is awesome. The games bring people together, game day food is always great…I just don’t like conflict. What I do like, however, is a good football backstory. You know what I mean, the team with the player that came from the bench and made an amazing play, shooting him to star status in an instance. The player whose wife just had a baby, and he just made it to the field in time for kickoff because he was up all night watching his new little one being born…and his team wins! To me, that’s what’s the true heart of the game, and that gives me something meaningful to cheer for when I’m watching to see who will win.
I assure you, my boyfriend doesn’t need a good backstory to enjoy the game, though! When we discussed what our new family football traditions would be, he said, “You could bring me beers and make snacks.” Uhm…no. After more conversation, we decided that since the entire family likes pizza, and we eat it at least once a week, that we could make pizza for Monday night football. The idea fleshed out a bit, and each Monday we’ll make a new dish to try. Sometimes it’ll be something sweet, sometimes it’ll be savory, the only rule is that it has to be done before the game comes on! Not a bad compromise for a former Eagles gal and a 49ers guy, huh?
Previous Post: « More Rockstar than Mama in Old Navy’s Rockstar Jeans
Next Post: {Saturday Sights} Tilden Park – Berkeley, CA »