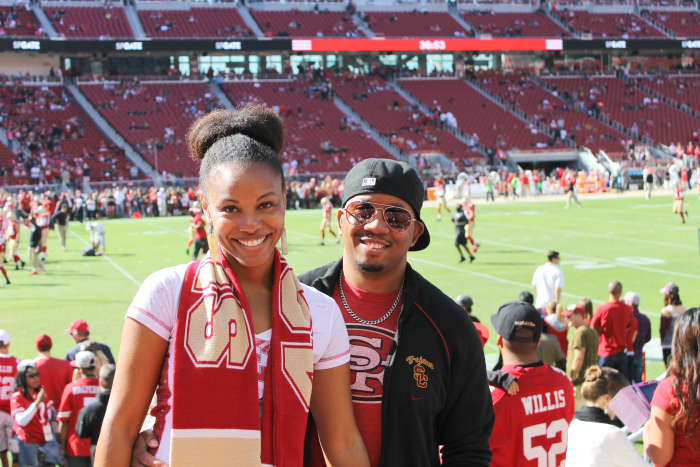 My marriage is perfect. I mean, it’s obvious, right? One glance at my social media accounts, and it’s clear that I think my husband is: (1) Fine, (2) Sweet, and (3) Brilliant. He takes such good care of Ayva and me, and I love being his wife. It’s kind of taboo to talk about how good your marriage is, though. People get pretty annoyed with it. They think you’re bragging, and skeptics wonder what’s going on behind closed doors because “nobody is really that happy.” They don’t call it the old “ball and chain” for no reason, right?

On the other side,  you have married folks that are too afraid to talk about how awesome their lives are because they’re worried about jinxing their union. Because apparently, if reality television is any indication (and it is, because it’s totally real), as soon as you publicly declare adoration for your partner (or get a tattoo of their name on your body), you’re basically signing a death wish for your relationship.

Well, I don’t care about any of that stuff. I’m going to shout loud for all of the internet to hear:

I LOVE THIS MAN!

I know, I know. Life isn’t perfect. You know what, though? Everything about this marriage is perfect to me. Now, before we got married, there were definitely some challenges that we had to overcome. We grew up differently, so learning to relate to each other, and finding a common foundation on which to base our marriage took a little bit of time. We went to pre-marital counseling, and pushed through a few difficult personality traits to get to real communication. Even after we said, “I Do”, we still had lessons to learn about how to treat one another as we continued to get to know each other. That’s normal. And it doesn’t make our marriage imperfect.

Terrence and I get along well. We agree on most issues, and on the things that we don’t, we’re able to find a compromise fairly quickly. Although I can’t say we never argue, our arguments are so infrequent (we’re on a “once every quarter” plan right now), that they don’t really make much of an impact on our relationship. Our marriage is easy. We’re both happy and content, and I don’t think either one of  us could ask for anything more.

How did we get to this state of marriage zen and perfection? Last week a friend remarked at how he’d like to have a relationship where there were no power struggles or egos to deal with. I can honestly say that Terrence and I have that. When we first got together that wasn’t the case (for example, that one unfortunate ego issue over a set of coasters…). However, now, we’ve learned to trust that the other person has our best interests in mind, and we respect the things about each other that make us different. I think those are probably the biggest differences in a relationship that works and one that doesn’t. Intentional trust and respect.

Consider this a public service announcement. Your marriage will not be doomed if you talk about how awesome it is. It is possible to be in a great relationship where you feel safe and comfortable and happy. You can have a marriage that is 100% absolutely positively perfect for you. Now, if only I could talk Terrence into getting my name tattooed on his neck…(I kid, I kid! Unless he wants to. Ha!)

I love this Brandi! I'll say I do not currently have a perfect marriage- those powers struggles I tell ya! But we're close! :-)

I think you should get HIS name tattooed on YOUR neck. I'm really envious of your marriage, not irritated that you talk about it, I think it's wonderful. I am just envious that I don't have such a perfect union. I wish I could get my man to go to counseling. One of us has some serious ego issues. Oh who am I kidding, maybe we both do. <3

So happy that you and Terrence have a Sunday kind of Love ... I agree shout it out from the mountain tops and every corner of the internet; We should talk more about how great love is, instead of only announcing misery. People seem to be more comfortable with sharing that than the happy memories ... I wonder if Danny will get my name tattooed on him ... I'll let you know how that conversation goes. LOL

Nothing wrong with bragging about the awesomeness. It also helps that you don't air the dirty stuff. We all know it happens, but publicly airing it doesn't really help.

Does it not, though? Isn't there a way to air the dirty stuff that helps others who might be going through the same thing?

"Intentional trust and respect." -- That's it, right there. xoxo