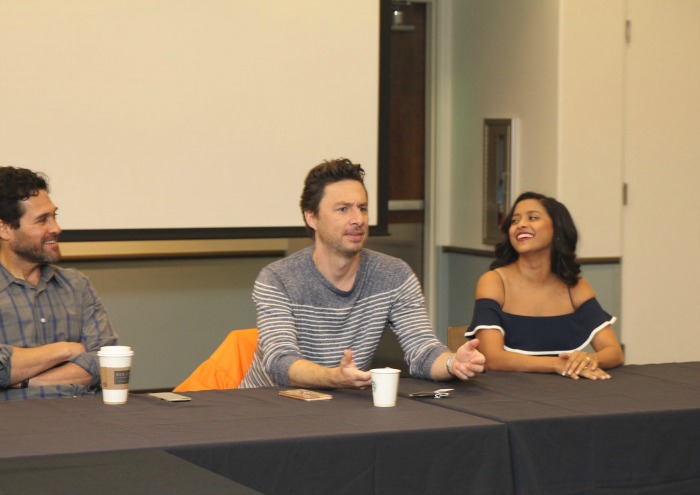 I love social media. Podcast, Youtube videos, blogs—any way that I can get information on the internet and engage with other folks at the same time is going to get a yes from me. That’s why I’m excited about the premiere of Alex, Inc.

The show stars Zach Braff as a dad who leaves his comfortable job to start a podcast! Diverse, funny, and authentic, my husband and I have already set the DVR to record the entire season of this show. Find out more about what you can expect in this exclusive interview! 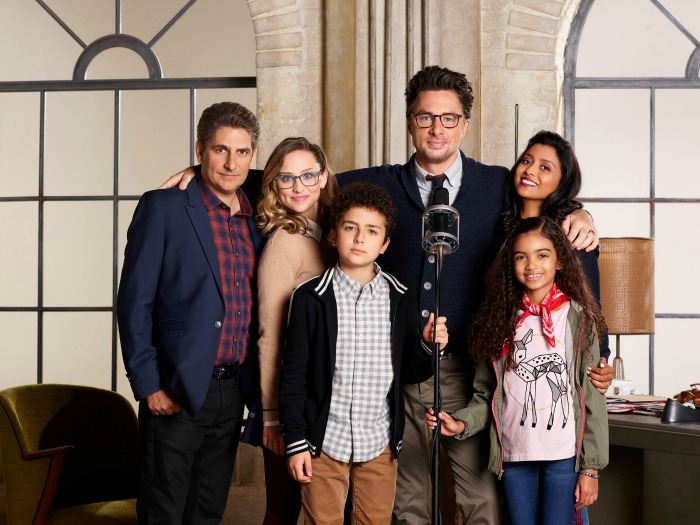 What made you want to do a show like this?

Zach Braff: I went to meet with the producer, John Davis, and he said you gotta hear this podcast. I’m not even sure if you wanna act right now, ’cause I had been directing a bunch. He said it’s the best podcast I’ve heard in a long time. Everyone’s talking about it. We optioned it and we wanna turn it into a family comedy. On my drive home from the meeting, I listened to two episodes and then went into my house and kept listening. The podcast is called Startup, and I just found it fascinating. I thought it would be a great TV show.

The show has a lot of multicultural representation. How did that come to be?

Matt Tarses: This is based on this real podcast and a real couple. His wife is Persian-American. We wanted to preserve that. There’s a little bit in the podcast about her parents and about the different cultures.

Tiya Sircar: These guys were like, look, you know, we want this to be as accurate a portrayal as an Indian-American family or an Indian-American character as possible. Even if it’s down to like the right kind of tea that they’re drinking, and I was like that’s good because we are very particular about tea. So, I really appreciate how much of an effort the producers and writers have made to make this authentic and not just sort of like an stereotypical idea of what an Indian-American family looks like.

It’s exciting to me because growing up there was no one that looked like me on television. Even now there is Master of None, The Mindy Project, and so on and so forth, but we sort of like get specific. If I were a kid watching that, I would have been so excited.

Are you interested in social media in real life?

Zach Braff: Social media is wonderful for getting your word out there about projects and saying, hey, obviously if you’re following me, you might like other stuff I’ve done. I have this new thing that you might like. And then occasionally I can’t help myself but get politically, but I try and curb it a little bit.

Sometimes I’ll just say something half-awake in the morning and I’ll like fall back asleep. And then I’ll wake up and there’s like 10,000 retweets. I’m like, oh, no, what did I do.

What can we expect to see in regards to the relationships in the show?

Matt Tarses: The main tension in the show is that he started to do this thing that’s incredibly time consuming and takes him away mentally all the time. It’s a shift, ’cause he had a job before where he was much more kind of a available. And so, she’s a great supportive partner, but I think that leads to a lot of issues and it gets to a place at the end that’s we hope’s surprising.

Zach Braff: Because he had so much more flexible hours, they kinda had the routine down. He could be home in town to have the whole bedtime routine and he would do dinner. aThey had it all dialed in. And when he throws it all up in the air, season one is largely about them all adjusting to this new paradigm.

Tiya Sircar:  I kind of love that there is this general role reversal where there are two working parents, but it’s the dad who has historically been the one that sort of handles the day-to-day parenting, you know, everyday things.

And suddenly because this situation has shifted and now he’s got this very demanding adventure that he’s trying to embark upon, suddenly the wife is faced with like PTA meetings and field trips and juggling her very demanding career that she’s very successful at. But suddenly she’s like, oh, I have to bathe these kids before they go to bed.

I just love that it’s flipped on its head a little bit and it’s not like the normal familial dynamic that we generally see on network television.

More about Alex, Inc. from the studio:

With the help of wife Rooni and their children, Alex Schuman quits his prominent job to start his own podcast company telling real stories that matter. He hires his cousin Eddie and former producer, Deirdre, to help achieve his dream. Meanwhile, Ben performs magic at the school talent show which teaches Alex an important lesson about his future, on the series premiere of “Alex, Inc.,” WEDNESDAY, MARCH 28 (8:30-9:00 p.m. EDT), on The ABC Television Network, streaming and on demand.